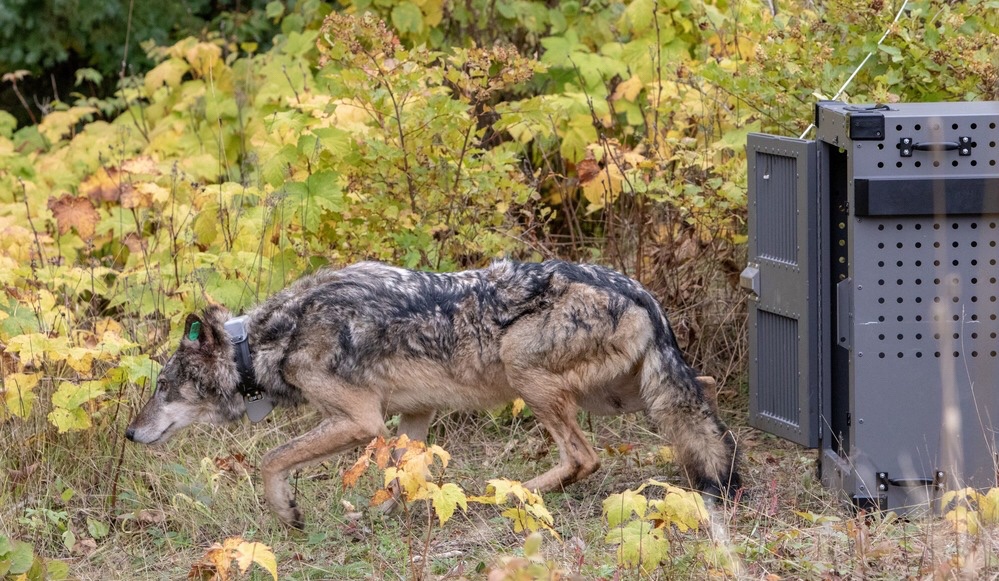 I wanted to learn more about the Isle Royale National Park Service (NPS) wolf translocation project to restore predation to the island ecosystem. I headed over to Minneapolis, Minnesota to attend the International Wolf Symposium, and listen in on the Isle Royale Panel update; with John Vucetich, Mark. Romanski, and Joe Bump – moderator Doug Smith. After the panel discussion I spoke with John Vucetich the lead researcher on the Wolf-Moose Study and filmed the following update from Vucetich:

Filmed at the International Wolf Symposium on October 13, 2018 by Rachel Tilseth. The wolf introduction plan comes at a critical time. The 2018 winter study, led by researchers from Michigan Technological University, confirmed that just two wolves remain on the island and there is no hope that this pair will successfully breed. The nearly 1,500 moose at Isle Royale may double in population over the next several years, throwing the health of the park out of balance and devastating the island’s vegetation. Now is the time to restore this top predator and bring balance back to Isle Royale National Park, NPS.

This photo provided by the National Park Service shows a 4-year-old female gray wolf emerging from her cage at Isle Royale National Park in Michigan on Wednesday, Sept. 26, 2018. The wolf — along with a a 5-year-old male — was flown to the park Wednesday from the Grand Portage Indian Reservation in Minnesota to kick off a multi-year effort to restore the predator species on the Lake Superior island chain. National Park Service via AP

In a release from NPS HOUGHTON, MICHIGAN– After years of study, public engagement, and planning, the first wolves in a National Park Service (NPS) wolf translocation project to restore predation to the island ecosystem have been moved to Isle Royale National Park from the Grand Portage Indian Reservation.

Click here to watch the NPS video of the first wolf release.

On Wednesday, September 26, late in the day, two gray wolves, a 4-year old female and a 5-year old male, were taken to the island on a U.S. Fish and Wildlife Service aircraft. The wolves were then carried to separate release sites away from the public and the territory of the two resident wolves. It did not take long for the female to leave the crate and begin exploring her new home on the island. The male left his crate after dark. Other wolves will join the two in the coming weeks.

The USFWS Kodiak seaplane arrives on the island with the wolf.

“We have been planning this relocation operation with our partners and are very pleased with the progress so far,” said Superintendent Phyllis Green. “Releasing these two wolves on the island is the first step to restoring the ecological dynamic in the park. The assistance of all our partners is critical to the success of this effort.” On this project, the NPS is collaborating with the Grand Portage Band of Lake Superior Chippewa, Michigan Department of Natural Resources, Minnesota Department of Natural Resources, U.S. Fish & Wildlife Service, U.S. Department of Agriculture Wildlife Services, U.S. Geological Survey, University of Minnesota, and multiple NPS units.

The male and female wolves released on the island Wednesday came from different pack territories on the Grand Portage Indian Reservation in northeastern Minnesota. Both wolves received medical examinations by NPS wildlife veterinarian Michelle Verant, wildlife veterinarian Tiffany Wolf of the University of Minnesota, and USFWS wildlife veterinarian Samantha Gibbs before they were transported. Both were found to be in good condition and apparently healthy. Each wolf weighs approximately 75 pounds and has a thick coat of light tan, gray, and white fur with black markings, which is typical of gray wolves in the region. The wolves were vaccinated and fitted with GPS collars.

The Record of Decision for the Plan to Address Wolf Presence on Isle Royale National Park was signed by the NPS Midwest Regional Director Cam Sholly in June. The goal for this fall is to translocate up to six wolves from the Minnesota and Michigan mainland to the park. This is the first phase of a three- to five-year effort to relocate up to 20-30 wolves to the isolated island park. Researchers recommended this number of wolves to establish adequate genetic variability to help accomplish the overall goal of restoring predation as a key part of the ecosystem on the island.  The NPS plans to monitor ecological conditions and other factors, such as predation rates, genetics, moose-wolf ratios, and terrestrial and aquatic vegetation impacts to evaluate project success.

A female wolf captured with intent to be released at Isle Royale National Park died before it could be set free. Officials didn’t identify the cause of death, but said they were altering field procedures for handling wolves captured for the park’s wolf recovery program.

In a brief release Friday evening, park staff said the animal was captured on Thursday, given a quick exam in the field by wildlife biologists, and “deemed fit for transportation.” While the wolf was sedated and taken to a holding facility for a more detailed exam, her condition deteriorated and she died. The wolf was transported to the University of Minnesota Veterinary Diagnostic Lab for necropsy and diagnostic evaluation Friday.

The last glimpse of the third wolf relocated to Isle Royale.

Roger (Poe) Deschampe Jr. and Seth Moore of Grand Portage work with NPS Wildlife Vet Michelle Verant to collar a wolf that they released shortly after near Grand Portage.

Not all wolves captured are candidates for Isle Royale relocation. This female wolf was collared then released and will contribute to knowledge of wolf pack activity in Minnesota.

The gray wolf (Canis lupus), also known as the timber wolf, has been the prevailing predator of Isle Royale National Park since its arrival to the island in the late 1940’s.

Moose (Alces alces) first arrived on Isle Royale in the early 1900s. Since that time, moose have become one of the iconic mammals of Isle Royale National Park.

Fall Implementation of Wolf Translocation Project Ends due to Weather

The National Park Service announced today that the fall phase of the first year of its Isle Royale wolf translocation project has been brought to a successful close with four wolves translocated to the island from Minnesota. Though the original goal called for two additional wolves from Michigan to be relocated this year, cold weather, extensive rain, and snow showers made it necessary to end trapping efforts.

“Animal welfare is the primary concern,” said Isle Royale National Park Superintendent, Phyllis Green. “The continued cold weather, which created safety issues for trapping, and high winds and waves in the marine forecast which created additional issues for transportation, led to the decision to end this phase of the project a little early. The park and its partners in this project are already looking at the next phases of the translocation process, which may include relocating wolves from Canada this winter.”

This three- to five- year effort will relocate up to 30 wolves of a certain age range evenly split between males and females to the isolated island park. Researchers recommend translocating this number of wolves to establish adequate genetic variability and to help accomplish the overall goal of restoring predation as a key part of the island ecosystem. The goal for the first phase of this multi-year project was to translocate up to six wolves from the Minnesota and Michigan mainland to the park this fall.

The fall operation ended with four wolves relocated to the park: one male and three females. Their addition brings the island wolf population to six, which includes two animals on the island from a remnant population. An additional four animals could be brought to the island this winter from Canada. Isle Royale National Park Chief of Natural Resources and Translocation Project Manager, Mark Romanski said, “All of the wolves are moving about and exploring the island, as evidenced by GPS collar data. We will continue monitoring their movements to determine if they form any new packs.”

Green and Romanski agree that the success of this first phase of implementation was due to the project partners’ professional experience and knowledge of local wolf packs. “The Grand Portage Band of Lake Superior Chippewa worked closely with U.S. Department of Agriculture’s Wildlife Services to ensure all four wolves were from different packs and that trapping operations were successful,” said Green.

Sixteen different wolves were captured on the Grand Portage Chippewa reservation during the trapping cycle. Seven of those wolves were collared and released either on Isle Royale or at the site of capture. Young wolves were ear tagged and released. Collaring and ear tagging contribute to the Grand Portage Band’s on-going monitoring program. Ear tags have been invaluable in determining age of wolves for the Isle Royale project and in population estimates on the mainland.

The US Fish and Wildlife Service provided an airplane and pilots for the project and worked carefully within narrow weather windows to move wolves to the island safely. Even though the weather precluded relocating wolves from Michigan this fall, the Michigan Department of Natural Resources and USDA Wildlife Services were ready in Michigan to support the effort and had coordinated many activities that will ensure success next year.  “We thank all of our partners and look forward to working with them to complete the relocation project over the next three to five years,” Green said.