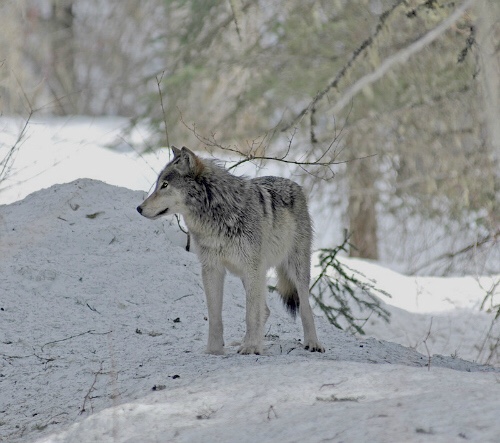 A very in-depth interview of all parties involved around the sexual assault of a young female wolf activist while working in Montana and Wisconsin. This article delves into the role of how:

“…It’s incredibly damaging to the movement to have an elder be harassing women.”

Yet this article clearly demonstrates the courage of the young woman, as she refuses to harm the movement by answering the FBI questions. She wouldn’t inform on the movement.

I’m a Wisconsin wolf advocate, so when this story first came out, refused to continue working with Coronado, because he clearly refused to be accountable for this kind of predatory behavior towards woman. The article makes it clear Julie wasn’t alone or the only victim of this predatory behavior.

“But for all those who questioned Henry, there were at least as many who supported her.”

“People that have been persecuted by the state are martyrized and lionized in ways that survivors aren’t,” Anderson told The Intercept. “The way the movement takes more seriously state repression versus political violence against women allows people like Rod — not to milk it, but to use it as a shield.”

JULIE HENRY WAS jogging when she got the call from the FBI. She didn’t recognize the number, which had a Washington state area code, but she answered anyway. The FBI agent identified herself as Kera O’Reilly, and said that Henry wasn’t in any trouble. O’Reilly was there to help.

“People can’t fathom that someone could both be a nice person in a meeting and hit their girlfriend or sexually assault someone,” said (Brian) Frank (an organizer with Earth First!). “For some people, it’s so unbelievable they think it must be a conspiracy.”

The phone call, which Henry received on February 22, 2018, brought her back to an internal conflict that she thought she’d finished wrestling with two years earlier. O’Reilly wanted to talk to Henry about her online account of sexual assault, which was strange if you consider that the offense is a crime over which federal agents rarely have jurisdiction. But it made perfect sense considering the person she wanted to discuss: Rod Coronado.

To his supporters in the animal rights community, Coronado is a folk hero who has lived his convictions. People have even written songs celebrating him. To the FBI, Coronado is an eco-terrorist, an arsonist, and a criminal. Although the agency has already managed to put him in prison four separate times, including for setting fire to a mink research facility and dismantling a mountain lion trap, law enforcement apparently still isn’t finished with the 52-year-old activist, who publicly denounced sabotage as a tactic more than a decade ago.

Yet for all of his public accolades and detractors, Henry knew a different side of him.

Nearly four years ago, Henry says, in the midst of a campaign to monitor a state-sanctioned wolf hunt with Coronado’s organization Wolf Patrol, in a remote area outside Yellowstone National Park, Coronado sexually assaulted her. Henry says she didn’t even think about calling law enforcement. Activists aren’t supposed to talk to cops, and definitely not to FBI agents. For months, she stayed silent. But then, after agonizing over the decision, she participated in an alternative attempt at accountability — she described Coronado’s assault in an email posted to a closed activist listserv and later published the details publicly in the activist Earth First! Journal.

Henry doesn’t regret her decision, but the process was painful and disappointing. Coronado denied that anything nonconsensual happened. Although many supported her, others — including some she’d considered friends and allies — didn’t believe her. Some went so far as to label her a snitch and a federal operative, smears often directed at someone perceived to have weakened the movement by talking publicly about internal divisions that law enforcement can exploit. Read more here.