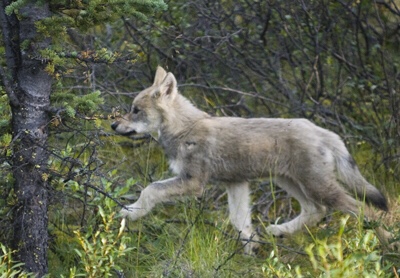 …You have to wonder why a law in Wyoming prohibits releasing the names of wolf poachers; Is it because millions of people worldwide respect the role the Gray wolf plays on keeping ecosystems healthy.

The Jackson Hole News and Guide reports Wyoming Game and Fish Department spokesman Mark Gocke could give no more details other than saying the pups were reported dead Thursday within Game and Fish’s “trophy game” wolf hunting area, where there are defined seasons and rules on killing wolves.

A Wyoming law prohibits wildlife managers from identifying anyone who legally kills a wolf — or releasing information that could lead to their identity being revealed.

The four wolf pups were born this year, so they would have been about 4 or 5 months old. They were taken to the Wyoming State Veterinary Laboratory in Laramie for necropsies.

In this clip wolf advocates share their stories. Ilona Popper is a writer and advocate for wolves. Dr. Nathan Varley and Linda Thurston Wildlife biologists and business owners of The Wild Side Tours & Treks in Yellowstone National Park. Song credits: “Don’t Know Why, But They Do” Words & Music by Joe De Benedetti & Noah Hill. B roll credits thanks to National Park Service.

“Inside the Heart of Wolf Advocacy- The Yellowstone Story” a film that presents the viewer with a complete picture of what it means to advocate for an imperiled species protected within Yellowstone National Park; contrasted against an uncertain future because of wolf hunting taking place just beyond the park’s borders.

M.A Documentary by Practice, University of London – Royal Holloway. Graduated with Merit  B.A Media & Theatre Arts, Montana State University, Bozeman, Montana, Graduated Cum Laude. Raised in the Paradise Valley, schooled in London, traveled to 25+ countries, rooted in the Montana wilds. Growing up in Paradise Valley all I wanted to do was travel and see the world. After getting my BA in Filmmaking from Montana State University I did just that. I traveled to some amazing places, from the wild Gobi dessert in Mongolia to the temples of Angor Wat in Cambodia to the hustle and bustle of London where I received a Masters in Documentary filmmaking from the University of London. Returning to Paradise Valley to document the beauty that surrounds me daily. My passport ever ready for the next international adventure and hiking boots ready to explore the Greater Yellowstone Ecosystem.

Rachel holds a Batchelor of Science Degree in Art Education and is a retired art teacher. Tilseth’s interests in nature, specifically wolves, led her to advocate for wolves and wildlife. In the year 2000 she became involved in WI DNR Wolf Recovery Program working as a volunteer winter wolf tracker to present. She founded the blog and social media network Wolves of Douglas County Wisconsin to bring education and awareness to Wisconsin’s wild wolf. Tilseth has spent several years speaking out against wolf trophy hunts. Tilseth is active in working to ban Wolf Hounding in Wisconsin. She has a strong background in the visual arts. She’s a sculptor and oil painter. Tilseth has expanded her interest into filmmaking. She’s currently in the process of creating a documentary film about the heart of wolf advocacy.