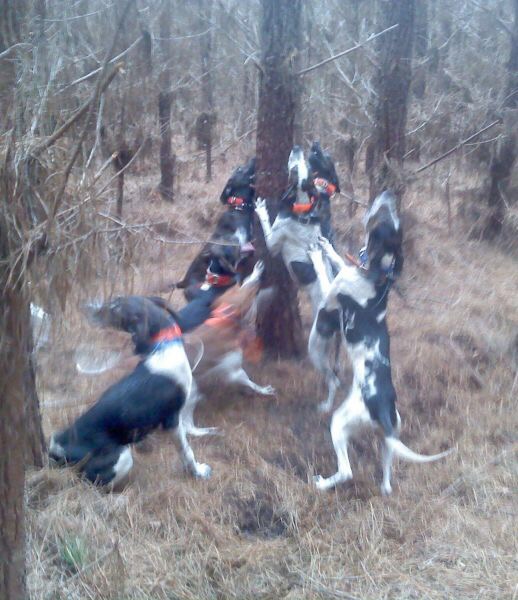 Eighteen days into the 2-month-long period for training hunting dogs to pursue black bear in northern Wisconsin, the WI DNR confirmed that a Plott hound hunting dog had been killed by wolves in Ashland county, Wisconsin as the bloody dog-on-wolf conflict continues.

From July 1st through the end of August, hounders are allowed to train their dogs to pursue free-roaming wild black bear. The WI DNR posts wolf caution areas when there has been a conflict with wolves on public land. There is an interactive map that allows anyone to see the locations of verified wolf conflicts from 2013 to the present day. Bear hounders are urged by the DNR not to run their hounds through these areas. Yet some hounders, abreast of the latest information, continue to run their dogs through these wolf caution areas.

A Caution Area is established to warn hunters or others who may be recreating in an area where conflicts between wolves and a dog or group of dogs have been documented. Individuals accessing these areas are urged to exercise greater caution if they plan to train or hunt wild game with dogs or allow pets to run off leash, especially in areas where multiple conflicts have been documented. From the WI DNR website

Wolves often use the same den sites from year to year. Wolf pups are born in April and are only 2-3 months old when bear-hounding training begins. Wolf pups usually spend most of their days near the den site or a rendezvous area. Wolves are protective of their families and see other canids, coyotes and dogs, as threats to their pups. Running hounds through known wolf den or rendezvous areas needlessly endangers the lives of both the hounds and the wolves.

Wisconsin Wolf Depredation program compensates hounders $2500 if one of their hounds is killed by wolves during the bear hounding training and hunting periods, even if hounders run their dogs in the wolf caution areas posted by the WI DNR. Wisconsin is the only state to compensate hound hunters for their dogs. In 2016, compensation was paid out for 37 bear-hounding dog depredations. A few anti-wolf politicians claim this was due to the increase in Wisconsin’s wolf population, but wildlife biologist, Adrian Wydeven, points out that in 2012, when the wolf population was similar in numbers to 2016, there were only 7 hounding dog depredations.

Dog owners are reminded to exercise caution in wolf occupied areas, especially those using their dogs to hunt. Conflicts between hunting dogs and wolves are most common during the bear training and hunting season. From the WI DNR website

Why the drastic increase in hound depredation payouts in 2016? Perhaps the loosening of regulations regarding bear baiting and hunting. In 2015, Wisconsin eliminated the class B bear license, allowing an unlimited number of residents and non-residents to participate in bear baiting, running hounds on bear, and pursuing bears. Also, hunters can bait bears 6 months out of the year – April 15th through the end of bear-hunting season in the middle of October. No one knows how many hounds are running through the forests or how many bait stations are set out in the north woods.

For more information on new research about baiting of Wisconsin’s Black bear go to: Human food subsidies make up more than 40% of the diet of bears in northern Wisconsin