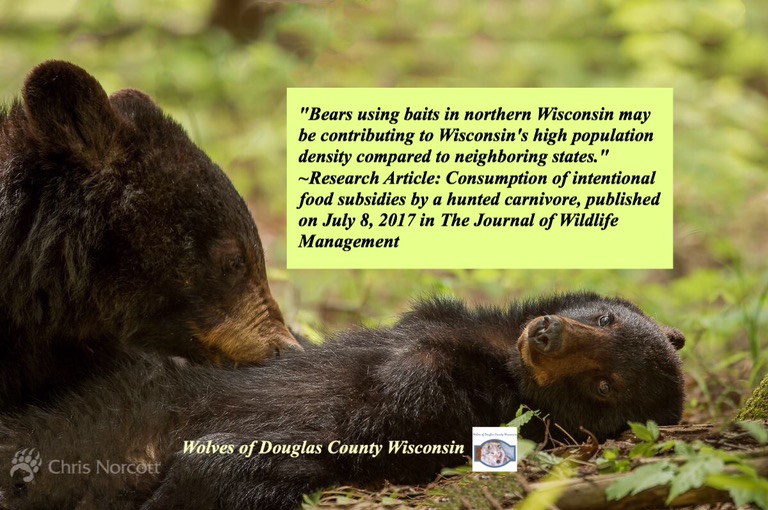 In a new research paper, titled “Consumption of intentional food subsidies by a hunted carnivore” authored by: Rebecca Kirby of the U.S. Fish and Wildlife Service, Jonathan Pauli assistant professor with the University of Wisconsin’s Department of Forest and Wildlife Ecology, and David MacFarland Wisconsin Department of Natural Resources large carnivore specialist. The Journal of Wildlife Management

The researchers documented the abundance of bear bait on forestlands, to determine the contribution of human foods to individual and population diets. That bear baiting on public lands contributed to 40% of their diet. They found that bears were relying on (human foods) subsidies throughout their lifetimes.

Bears using baits in northern Wisconsin may be contributing to Wisconsin’s high population density compared to neighboring states. Female consumption of high caloric food subsidies can increase fecundity (the ability to produce an abundance of offspring or new growth; fertility), and can train cubs to seek bear baits. Long-term supplementation can increase a population above its ecological carrying capacity. Extensive foraging on bear bait could affect individual bear nutrition through increased body sizes and energy requirements. Increased energy requirements and habituation may create a dependency on food subsidies; if food subsidies were removed, bear-human conflicts may increase and bears may no longer be able to subsist on natural foods.

High availability of energy-rich food can also alter denning chronology, shortening the denning period. In northern Wisconsin, humans are influencing the ecosystem not only through top-down forces via hunting, but also through bottom-up forces by subsidizing the food base. Researcers’ findings emphasize the need to understand what effects conservation and management strategies that feature human subsidies can have on wildlife, particularly how they alter behavior, population sizes, and demographic parameters. Consumption of intentional food subsidies by a hunted carnivore

The Bear Advisory Committee is a diverse group representing agency, non-agency, tribal and stakeholder interests. The committee meets to propose bear quota recommendations and advises the Wildlife Policy Team on a variety of topics such as population monitoring and research priorities. Department leadership considers proposed quotas in developing department recommendations for Natural Resources Board approval.

7 thoughts on “Human food subsidies make up more than 40% of the diet of bears in northern Wisconsin.”