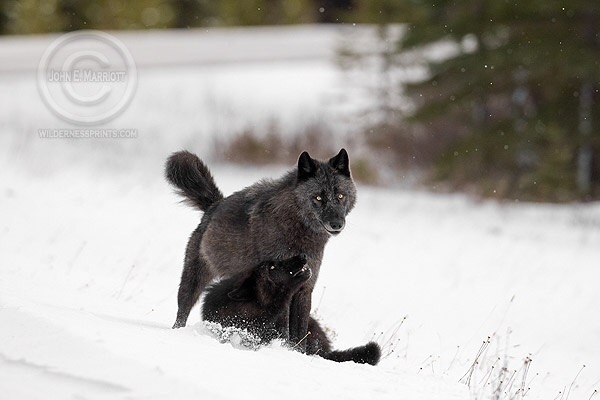 In the news from: Green Bay Press-Gazette Wisconsin senators Ron Johnson (R) and Tammy Baldwin (D) have joined Sen. Amy Klobuchar (D-Minn.) and Sen. John Barrasso (R-Wyo.) to introduce legislation that would remove protections for wolves in Wisconsin, Minnesota, Michigan and Wyoming under the federal Endangered Species Act.
If successful, the effort would return wolf management to the states, and bar courts from overturning the rule.
Last week, U.S. Rep. Sean Duffy (R) sponsored a similar bill in Congress.
Baldwin said she’s heard from farmers, sportsmen and wildlife experts and they all agree the wolf has recovered and must be managed by the state for the safety and economic well-being of Wisconsinites and the balance of the environment.
Johnson said the bill would not prohibit the U.S. Fish and Wildlife Service from returning the wolf to federal protections if it deems federal protections are needed, but said future decisions should come from wildlife experts, not the courtrooms.
Wisconsin held three wolf hunting and trapping seasons from 2012 to 2014, but a federal judge’s ruling in December, 2014 returned wolves back to federal protection.
The wolf population grew to a minimum estimate of nearly 900 in Wisconsin last winter, the highest in modern times, and a record number of hunting dogs and pets were attacked by wolves in 2016, including 41 dogs killed and at least 11 seriously injured.

The Wisconsin wolf is subject to a wolf hunting mandate when they are removed from the Endangered Species List. Wisconsin Act 169 ” If the wolf is not listed on the federal endangered list and is not listed on the state endangered list, the department shall allow the hunting and trapping of wolves and shall regulate such hunting and trapping as provided in this section and shall implement a wolf management plan. In regulating wolf hunting and trapping, the department may limit the number of wolf hunters and trappers and the number of wolves that may be taken by issuing wolf harvesting licenses.”

Wolves are not fully recovered but congress is ready to turn them over to states that hold wolf hunts claiming this is a necessary tool for management of wolves. States are chopping at the bit to kill wolves and Use carefully crafting propaganda to make the wolf look bad. there’s no-big-bad-wolf here just politicians that spread hate and fear. Fifty-two wolf depredations on livestock out of a herd of 3.50 million is not cause for killing an imperiled species in Wisconsin.

Click HERE to find you House of Representatives by state