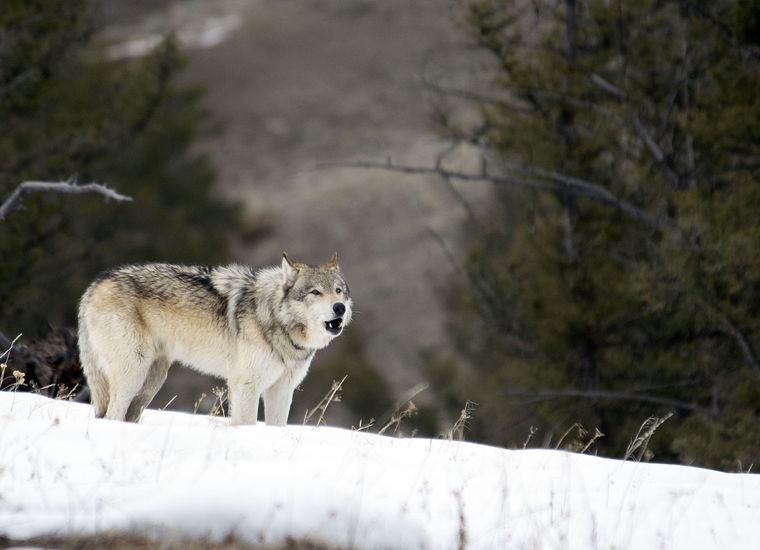 When the wolf known as 778M was in his heyday atop the Blacktail Pack, competing canines that ventured into his territory in Yellowstone’s Northern Range weren’t likely to be greeted with submission.The unusually large alpha male was fiercely defensive and protective.

“He would fight at the drop of the hat, and he was willing to run right into battle,” Yellowstone Wolf Project Biological Technician Rick McIntyre said.

“In defense of his family and his territory,” McIntyre said, “he was very aggressive.”

The size, aggression and smarts led 778M to a long, productive life, in wolf terms. At 9 1/2 years old, 778M was among the oldest known male wolves since the large carnivore species was reintroduced to Yellowstone National Park 21 years ago. Before being shot and killed by a Montana hunter last month, the big alpha was also the last living member of the Druid Peak Pack, which grew to an almost unheard of 37 animals, was witnessed by 100,000 visitors and helped make wolf-watching into big business.

Wolf 778M’s time in the world famous wolf pack, which ran the show in the Lamar Valley around the turn of the century, was fleeting. Born into the Druid Peak Pack in April 2007 as the grandson of one of the original Albertan transplants, “Big Brown” took off by fall 2008. He split off alongside four brothers, less than two years before the Druid Peak Pack was wiped out by mange.

Pairing up with four females from the former Agate Creek Pack, 778M and his band of brothers formed the Blacktail Deer Plateau Pack. Big Brown’s leadership role in the pack was a natural one, McIntyre said.

“He had that classic confidence and quiet self-assurance that pretty much all alpha males have,” he said.

Over the next several years the Blacktail Pack thrived, growing into a large and successful pack that topped out at 15 animals and held down territory in the western Northern Range.

Yellowstone Wolf Project Leader Doug Smith’s first interaction with 778M was in 2011, when he sedated, captured and collared the alpha male. At 118 pounds, he had plenty of heft.

At the time 778M was paired up with alpha female 693F, and though they never produced a litter together they made a “great couple,” Smith said.

The alpha female was found dead outside Yellowstone National Park in late 2013. Afterward, 778M headed outside the safety of the park as well, joining up with the Slip ’n Slide Pack.

“Where he moved first was 2, 3 miles over the park line, just outside in the Gallatin National Forest,” Smith said. “Four or five months ago he really took off and went way north, and I didn’t hear about him anymore. The next thing I heard is he got shot.

“He went from being one of our main wolves to being a peripheral wolf to being a wolf we didn’t keep track of at all,” he said.

In some ways 778M’s demeanor and resilience was reminiscent of his grandfather, 21M, the longtime Druid alpha that McIntyre described as the “all-time greatest heavyweight champion.”

Gardiner, Montana, wildlife photographer Deby Dixon looked back on the wolf she knew as Big Brown as a survivor.

“His whole pack died of mange,” Dixon said, “and he lived in Jardine for two hunting seasons prior to getting killed this year. He was fairly habituated, too — people didn’t bother him — so it’s amazing that he stayed alive for so long.”

Genetic testing of Yellowstone wolves in the years ahead will tell the tale of how well 778M spread his genes.

“Certainly there is a sadness in the death of 778 after living a long and difficult life,” McIntyre said. “But now that he’s gone, we still have descendants of the Druid wolves.”

“That’s happening right now,” McIntyre told the News&Guide, “as you and I are talking.”

7 thoughts on “Hunter kills the last of the Druid wolves”