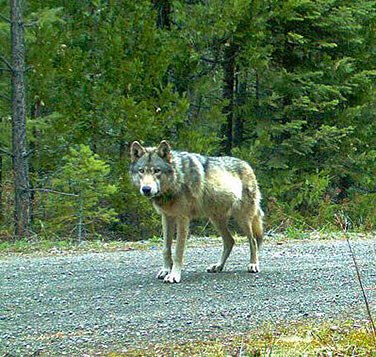 By John Darling for the Tidings Source: The Daily Tidings

Becky Elgin’s fascination with wolves was not surprising – after all, she grew up with them. That grew into an idea five years ago of writing a young person’s science book on the heroic adventure of OR-7, the wolf who trekked alone for hundreds of miles till he found the Greensprings territory east of Ashland, the perfect place to repopulate his breed for the first time in 60 years.
Her richly illustrated book, “Journey: The Amazing Story of OR-7, the Oregon Wolf Who Made History,” was published Dec. 1 by Inkwater Press of Portland, and, while it aims to inspire the imaginations of teens – and tutor them on the necessity of “keystone predators,” the book, she says, will readily engage and entertain adults.

You might wonder how Elgin grew up with wolves, but it actually happened, as her father was director of the zoo in Des Moines, Iowa, where several wolves lived alongside Elgin and played with her in the 1960s.

Elgin became a nurse and raised three children in Ashland, gradually steering her work into writing, earning a master of fine arts degree in writing from Pacific University in Forest Grove and taking writing classes at Southern Oregon University. Her father also was a nature author – and she followed suit, becoming a freelance nature and outdoor adventure writer. She recently wrote the cover story, on wolves, for Earth Island Journal.
Elgin got the idea for the book in 2011, while at a writer’s retreat in Imnaha in the northeast corner of Oregon, coincidentally the locus of new packs of wolves. It was there she heard about OR-7, a young wolf who was collared – and who surprised wolf scientists by breaking free on a solo journey to a distant but unknown ecosystem.
“He was heading south as I drove south, home to Ashland,” says Elgin. “He became the first wolf in western Oregon since the late 1940s. He quickly became famous all over the world. He was photographed near Butte Falls on a trail cam, then for a year went into California, the first wolf there in almost a century. It was so exciting. Then he came back to the Cascades of Southern Oregon and, somehow, a female found him. They’ve had three litters now … in what became the Rogue Pack.”
The book details how it’s normal for young wolves to break free from their pack at about age 2, to find new territory and mate. It’s become a phenomenon in Europe and elsewhere for wolves to expand into more civilized regions
“I decided to write a book for a middle school audience,” she says, “to educate young people not just about wolves but other aspects of the environment – and how a keystone predator, such as the wolf, is important to keeping the whole system in balance.”
The book, she adds, has a “storylike element” in which the reader sees life through the point-of-view of OR-7, also known as Journey.
“I made it as factual as possible, but still letting it be imaginative. Having grown up with wolves, I know firsthand their behavior and how they react in different situations.”
She traces the well-documented chapters of Journey’s dramatic life, from peeking his head out of his den as a young pup, catching the scent of beckoning adventure, being shot with a tranquilizer dart from a helicopter and collared, then wandering a land strangely devoid of potential female partners but finally finding his mate and raising wee ones.
Wolves are evolving through many stages, biologically and legally, as they re-adapt to a human-dominated world. They are federally protected in the western two-thirds of Oregon, she notes, while the state hammers out its “wolf plan,” providing regulations to protect them statewide – and to help resolve conflicts with ranchers.
Wolves are curious about humans but fear and avoid them, she notes. However, they are starting to include calves on their menu and ranchers near Fort Klamath are being reimbursed for losses believed to have been inflicted by the Rogue Pack. In a recent visit with a rancher in the region, Elgin said, she saw a training dog being used to teach calves not to wander alone from the herd, but to bunch up for safety.
There are a dozen packs in Oregon now and, Elgin notes, “they’re not going away.” Trail cameras show them in Lassen County, California, a male from the Rogue Pack and a female who – speaking of long treks – traveled from Idaho.
Elgin has written many articles about backcountry hiking, including one on trekking alone, as a female, and learning to overcome fears. She enjoys exploring the Greensprings, always on the lookout for the now-aging OR-7 and his descendants, but as yet, has found only their tracks.
Elgin plans a reading and book-signing at 6 p.m. Thursday, Dec. 15, at Northwest Nature Shop, 154 Oak St., Ashland. A portion of sales from the book will go to help wolf recovery.
John Darling is an Ashland freelance writer. Reach him at jdarling@jeffnet.org.