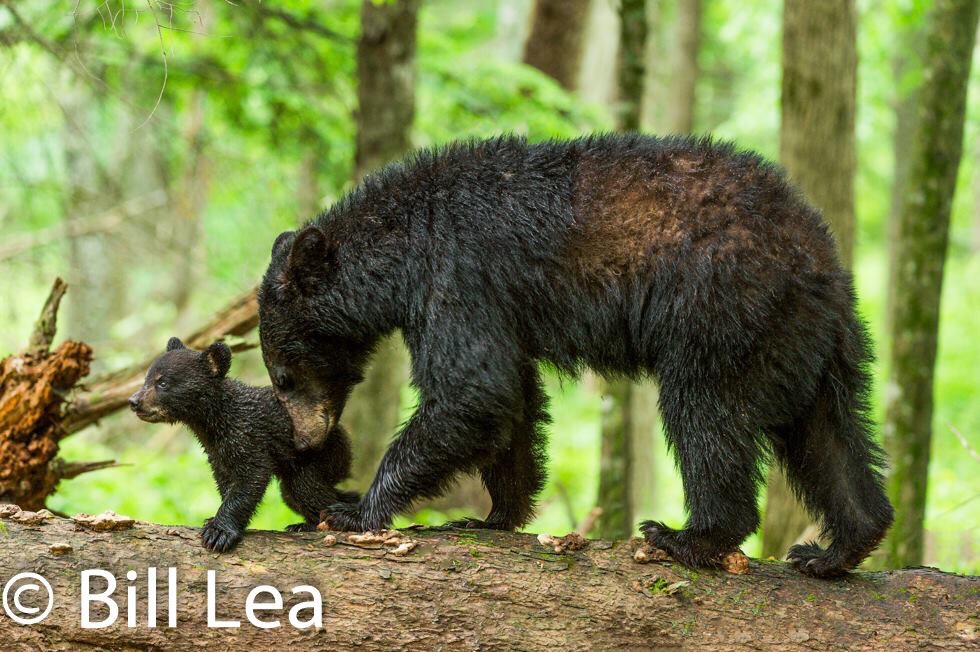 The Black Bear moves softly through the berry patch showing her cubs the way, teaching her cubs where to find food, just like her mother taught her generation after generation, until…

The greedy men laid out sweet smelling donuts hidden in a hollow log that tempted mother bear, and she used her strong paws to gain access to the sweet smelling treats. Thereafter, the silence in the forest was broken in by the noise of hollering hounds. These hollering hounds chased mother bear and her terrified cubs through the thick forest. Their hearts beating fast as they tried to out run the mob of noisy hounds. Along the way a mother deer and her fawn were chased up by the mob, and soon the once quiet forest rang with the sent of fear. Mother bear sent her cubs quickly up a tree, and made herself the decoy, and led the mob of hollering hounds away from her precious cubs. Exhausted mother bear climbed a tree, with the mob of hounds hollering below, the sounds of men is soon heard along with a shot of thunder ending mother bears life…

As mother bear dies she’s slips off of the tree branch hitting the ground below, and the mob of hollering hounds begin to nip and bite at her lifeless body. The men turned her lifeless body over exposing her belly, discovery they’ve killed a mother Black Bear by mistake, and it’s illegal to kill any Black bear accompanied by a cub or cubs. The men decide it’s an easy fix because they never saw any cubs during the chase because they lost sight of their dogs. High tech collars with radio telemetry tracking devices are used to follow the dogs from up to five miles or more away from the chase. So it’s a good excuse for bear hunters to use for killing mother bear because they never saw the cubs accompanying her.

The thirsty black bear cubs catch the faint smell of moisture floating through the air and head towards it. They find an opening in the forest that leads to a small lake.

The video is from The North American Bear Center A 6-year-old wild black bear female with cubs of the year feeding on a variety of vegetation in the early spring.

The cubs will stay with their very protective mother for about two years. In that two years she will teach them everything they need to know in order to survive. But what happens when two nine month old orphaned black Bear cubs are left to fen for themselves in the Wisconsin north woods? All because of greedy men? Find out what happens to the Hungry Orphaned Black Bear Cubs in the next installment of the series on WODCW’s blog…this is a fictional story based on research of the natural history of Black Bear habits.

Today, where the wild-creatures-live has become a war zone in Wisconsin. And it’s all in the name of sport. In Wisconsin’s north woods it’s common to see and hear hunter’s dogs running through the woods in pursuit of bear. These hunter’s dogs disrupt families; bear cubs are separated from their mothers, foraging black bears are kept on the move, and how about the White-tailed deer forced to protect her fawn from packs of free roaming hunting dogs in pursuit of bear. Gray wolves defending their pups kill hunter’s dogs in a never-ending-game played out in Wisconsin’s forests year after year.

Individual species should and must be managed for the good of the species and the habitat it depends. Wisconsin Department of Natural Resources estimates; most recent data indicates the bear population is currently estimated to be just under 29,000 bears. DNR manages bear population size through regulated hunting. In the end, black bears are managed for economic gain through hunting.

A cause for concern….

Today, black bears in Wisconsin are being conditioned to search out human foods placed at bear baiting stations. This is influencing the black bears natural habitat. Researchers found that; humans are influencing the ecosystem not only through top-down forces via hunting, but also through bottom-up forces by subsidizing the food base.

Bill Lea has been observing and photographing Black Bears.

It always makes me nervous when I see cubs playing high in a tree even if mom is right there overseeing everything. Sometimes I have even watched mother bears initiate play with their cubs while in the treetops. Cubs can and do fall from trees on occasion suffering injury or even death at times. But overall, bears feel about as comfortable and at ease in tree limbs high above the ground as they do on the ground itself. It is just so natural for them to be up there. Nonetheless, I still worry about them when they are so high, especially when they decide to play — even if mom is next to them making sure everybody behaves. Regardless, it is great fun watching a bear family interact and enjoy life together on the ground or high above in the treetops..