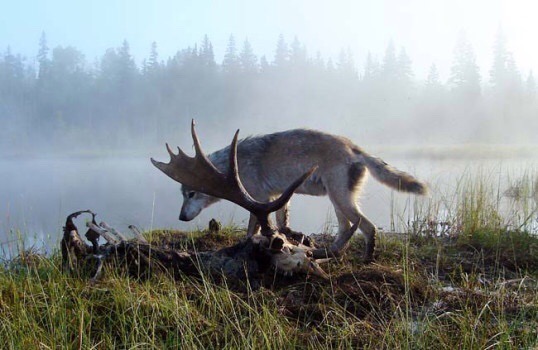 Isle Royale is a remote wilderness island, isolated by the frigid waters of Lake Superior, and home to populations of wolves and moose. As predator and prey, their lives and deaths are linked in a drama that is timeless and historic. Their lives are historic because we have been documenting their lives for more than five decades. This research project is the longest continuous study of any predator-prey system in the world.

As wildlife ecologists prepare for next month’s 59th annual winter study of wolves and moose on Isle Royale in Michigan, the U.S. National Park Service (NPS) today announced a surprising change in its usual hands-off management of the island wilderness on Lake Superior: proposed plans to introduce 20 to 30 new wolves over the next 3 years. (source)

“This is what I had hoped for,” says wildlife ecologist Rolf Peterson of Michigan Technological University in Houghton. Scientists, including Peterson, who has studied the wolf-moose interaction since 1971, earlier advocated for a genetic rescue of the island wolf population as wolf numbers in recent years dwindled to all-time lows. Only two highly inbred wolves remained on the island this past year, which coincided with the park’s decision to study the possibility of bringing new wolves to the park. There was no sign that the pair reproduced this year, although they were spotted on camera in July. Science Magazine

Wolves have been successfully moved and reintroduced to other areas, most notably in Yellowstone National Park and in Sweden. But the Isle Royale wolf introduction would follow nearly 6 decades of study of the predator-prey interaction on an island, and could illuminate how that interaction unfolds in a changing climate. Isle Royale Park Superintendent Phyllis Green emphasizes that the planning is not about a single species. “The focus really needs to be on ecosystems,” she says.

Although the park’s preferred alternative is for “immediate introduction,” Green says it likely won’t happen until the winter of 2018–19. The technical details won’t be made final until after the 90-day required public comment period. Science Magazine

To keep up to date on the reintroduction visit the Isle Royal Wolves & Moose website www.isleroyalewolf.org

“Inside the Heart of Wolf Advocacy- The Yellowstone Story” tells the stories of people working to preserve the legacy of wolves in Yellowstone National Park. A Wolves of Douglas County Wisconsin Film. Produced by Rachel Tilseth and Maaike Middleton and Directed by Rachel Tilseth. In this clip wolf advocates share their stories. Ilona Popper is a writer and advocate for wolves. Dr. Nathan Varley and Linda Thurston Wildlife biologists and business owners of The Wild Side Tours & Treks in Yellowstone National Park. Song credits: “Don’t Know Why, But They Do” Words & Music by Joe De Benedetti & Noah Hill. B roll credits thanks to National Park Service. www.wolvesofdouglascountywisconsin.com for more information. To support the film through a tax free contribution go to Plan B Foundation.

Learn more about our film project by clicking here.

3 thoughts on “In the News – U.S. National Park Service will be introducing 20 to 30 wolves to Isle Royale by next year…”