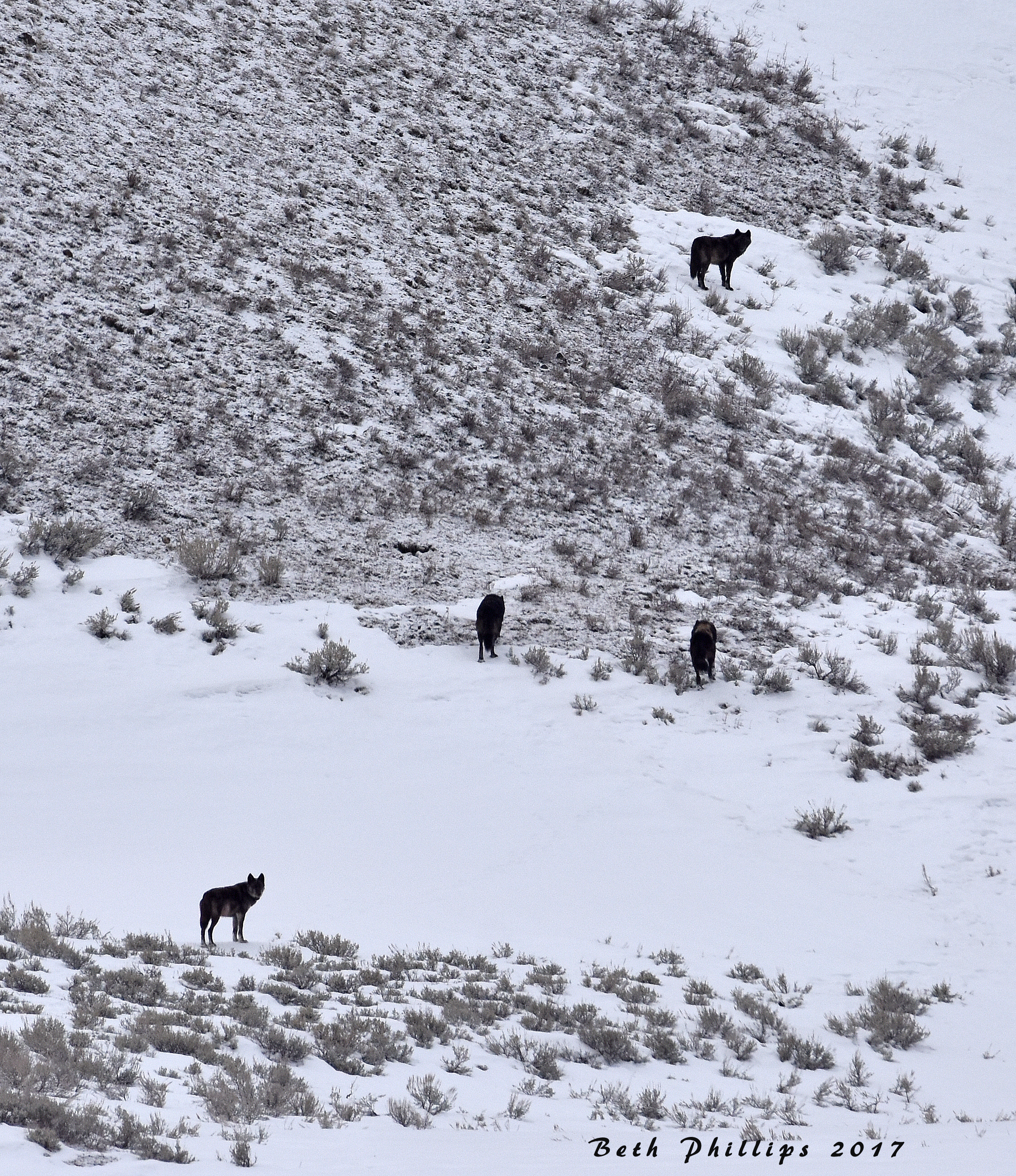 Nine days – in the grand scheme of things it is the blink of an eye, barely even a blip in time on the history of this Earth. It is how many days I was able to see 949M, the alpha male of Yellowstone’s Lamar Canyon wolf pack, during his lifetime. But those nine days of being able to watch 949M and the rest of the Lamar Canyon pack, even if it was for just a short time, will remain forever etched in my memory.

My annual 2-week foray into Yellowstone finds me aching to view wolves, especially the storied Lamar Canyon pack and their alpha female, 926F (my favorite). 949M’s reign as alpha male of this pack began in 2016 and was a short one, but I truly believe, an extremely important one.

When I saw the Lamar Canyon pack in March of 2016, 992M (aka Twin) was still the alpha male, and the pack was ravaged with mange. They seemed almost gaunt and clinging to life, and there was no spring in their step. If there were any pups that year, none survived. Shortly after denning season, alpha male 992M, beta male “Mottled”, 993M “Dark Black”, and 965M all died from various causes.

In stepped 949M, a large and handsome wolf, and 2 other males from the Beartooth pack, who seemed to be able to provide 926F and her daughter (Little T) with the nourishment they needed to overcome mange and to thrive.

My March 2017 Yellowstone visit encompassed my nine-days-worth of watching 949M. When I first saw alpha female 926F, she looked like a different wolf from the previous year – glossy coat, filled-out frame – I immediately knew that 949M was a good provider.

Those nine days showed me the cohesiveness and tenderness of this pack. I will never forget the day I was there when they crossed the road. 949M and the beta male, Small Dot, were quite afraid of the road (and rightly so). I saw them both running on one side of the road. Apparently, (although I didn’t get to see it) 926F and Little T had already crossed. When the two males didn’t follow, both females crossed back and helped the boys cross the road.

In late April, I, along with thousands of others, eagerly anticipated the spring pups from this royal lineage, along with an added bonus of pups from 926F’s daughter, Little T, who also looked quite pregnant.

Sadly, when most wolf packs were bringing their pups out of their den areas into view of the public, there were no pups from either female of the Lamar Canyon pack. What fate these wolf pups met, may never be known.

The Lamar Canyon pack stayed out of sight for much of the summer, pushed east of their home territory by the larger Junction Butte pack.

When 949M came back into view a couple of weeks ago, even though he had recovered from his own bout with mange, it was quite obvious he was in physical distress. His fortitude and fight kept him alive for several days, but he eventually succumbed to his injuries or illness. I hope the Yellowstone wolf biologists will be able to determine the cause of his death.

949M’s reign as alpha has come to an end. He was able to live his life free and on his own terms. Although he has no surviving offspring with 926F, he came to her rescue when she was down and out with mange, allowing her to recover and carry on the legacy and bloodlines of her parents, 832F (aka ’06) and 755M.

May your spirit run free, 949M, and your legacy in the Yellowstone wolf world live on to eternity. I feel blessed that our lives shared the same path for nine wonderful days.