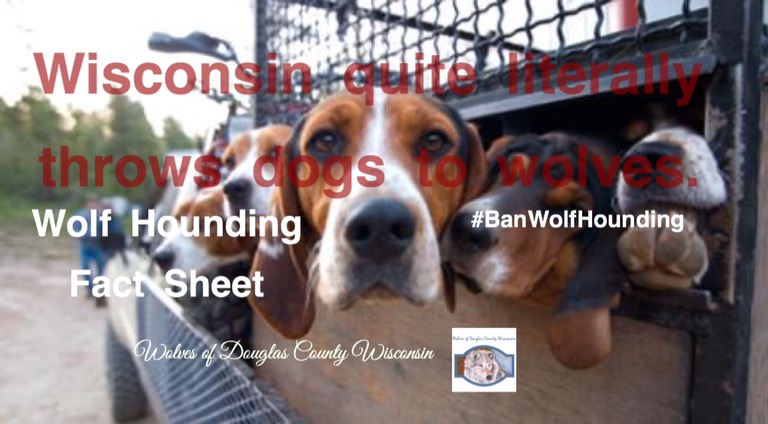 At his best, man is the noblest of all animals; separated from law and justice he is the worst.  ~Aristotle

The following is a wolf hounding fact sheet:

Out of all the states that hunt wolves, only Wisconsin allows hound hunters to use unleashed packs of dogs to hunt wolves. Wisconsin, quite literally, throws “dogs to the wolves.”Hound hunters traditionally train their dogs to focus on specific prey by releasing their dogs to surround, attack and terrorize a prey animal (e.g. a bear cub or fox) for hours on end (up to 16 hours/day) enclosed in a small, open barrel or “roll cage.” At this point it remains disturbingly unclear as to how hound hunters will train their dogs to pursue wolves instead of other animals—will it be by capturing wolves and allowing their dogs to attack them in barrels and pens? How isn’t this worse than illegal dog fighting?

“There has never been a more important time for the people of Wisconsin to show they are not going to give in to a small group of people that want to torture animals for fun under the guise of “sport.”  ~Rachel Tilseth

The Wisconsin Department of Natural Resources, charged with overseeing the wolf hunt, has no rules in place that require hound handlers to report dogs injured or killed in the pursuit of wolves during a hunt. In fact, there is no monitoring or certification program whatsoever in place for the use of dogs in the wolf hunt; thus the state has little ability to hold hound hunters accountable for training or hunting violations or to prevent deadly and inhumane wolf-dog confrontations (e.g., hunters allowing dogs to overtake and kill rifle-shot wolves). These circumstances explain why Wisconsin stands alone: using dogs to hunt wolves is no better than state-sponsored dog fighting.

Hound handlers are equipped with high tech radio telemetry devices that allow them to track GPS-collared hunting dogs from long distances. They are often not able to catch up to hounds that have a wolf at bay to prevent deadly fights between dogs and wolves. As proof of this, to date, Wisconsin has paid nearly $500,000 to “reimburse” hound-hunters for hunting dogs injured or killed by wolves. See link WDNR Dog depredations by wolves

Wisconsin, quite literally, throws “dogs to the wolves.”

According to DNR regulations, hound handlers are only allowed to use up to six dogs at a time to trail wolves. But handlers often replace tired dogs with fresh ones and younger dogs. It is common for a handler to be unable to retrieve the tired dogs, and end up with up well over 6 dogs chasing one wolf, potentially twice or even three times as many. There is no monitoring system in place to ensure that only 6 dogs pursue wolves.

I wrote the following in 2013 just prior to the first wolf hunt in Wisconsin to use dogs; I’ve seen first hand the effects of this bloody sport of running hound on bear as a seasoned WDNR winter wolf/carnivore volunteer tracker. I’ve seen the torn up bodies of bear hound dogs after an encounter with wolves. The wolves were defending their pups against a pack of hound dogs. This year wolf hounders can use six dogs at a time to chase wolves. What will happen if the hound’s handler is not right there when the wolf turns to defend himself? I think this will turn into a bloody dog versus wolf fight resulting in dead dogs and wolves. I am betting that this is a sport that Wisconsinites will not condone.

TAKE ACTION: contact your Wisconsin Legislator click here and make it clear you do not sanction Wolf Hounding in Wisconsin!