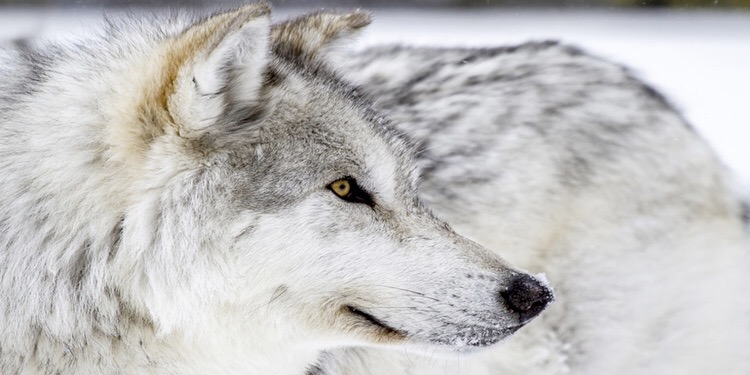 If ranchers around the West don’t make more use of nonlethal deterrents to predation on livestock, they risk losing access to the public lands they need, a conservation-minded sheep rancher said during a presentation on the subject last week in Ketchum.
At The Community Library on Thursday, Brian Bean, co-owner of Lava Lake Lamb, described the tools and techniques provided to ranchers by the Wood River Wolf Project, which seeks to save the lives of both livestock and wolves. The project was begun nine years ago by the group Defenders of Wildlife, but was handed over last year to the nonprofit Lava Lake Institute for Science and Conservation, of which Bean is a co-founder.

In 2014, the Idaho Legislature created a $400,000 fund to pay for lethal control of wolves preying on livestock, which is carried out upon request by Wildlife Services, an agency of the U.S. Department of Agriculture. That fund was reauthorized in 2015 and 2016. In addition, using money provided by the U.S. Fish and Wildlife Service, the state compensates ranchers for at least half the value of livestock lost to wolf depredation.

Bean said the ease by which ranchers can obtain free lethal control actions reduces their motivation to try nonlethal deterrents first.
“The system is set up to make it so easy to kill predators,” he said.
However, he said that system may be contrary to ranchers’ long-term interests as the public becomes less tolerant of predator control.
“There’s a much greater risk of public lands disenfranchisement than they believe,” he said.
To motivate ranchers to use those deterrents, the Wood River Wolf Project makes free “band kits” available to the five sheep operators who graze their animals on Sawtooth National Forest allotments, along with free instruction.
“We make it as easy as possible for the ranchers, so they don’t have any reason to say, ‘No, I don’t want to use these nonlethal tools,’” said project Coordinator Avery Shawler in an interview.
The 10 band kits available contain numerous items to scare wolves, including about a dozen flashing Foxlights, air horns, a starter pistol with 200 rounds of blank ammunition and small cylindrical boom boxes. The Wolf Project also provides “turbo fladry”—red flags strung along a solar-powered electrified wire to surround the outside of a band of sheep at night, as well as sleeping bags, pads and tents for herders to sleep with the band when it’s at too high an elevation to pull their camp trailer up.
Bean said the mostly Peruvian herders enjoy being with the sheep and don’t want to see them killed.
He said use of nonlethal deterrents has contributed to a reduction in wolf depredation on Lava Lake Lamb herds from several per year to one event every two or three years, as well as to fewer sheep being attacked each time.
“For us, we feel that it won’t be necessary to use lethal control, and for anyone who takes time to learn nonlethal [deterrents],” he said.
In about 2012, the Wood River Wolf Project was the first entity in the United States to use the Foxlights, a product invented by Australian sheep rancher Ian Whalen. The lights, set up among a band of sheep or other domestic animals, flash at random intervals to mimic humans walking around with spotlights that they are pointing in various directions while guarding their animals.
Whalen attended the presentation Thursday, which was intended primarily for him to demonstrate his product.
He said that in Australia, the main predator of sheep is red foxes, a non-native animal brought to the continent by the British to provide sport for hound hunting.
“Since then, they have decimated many of our small [native] creatures,” he said.
Whalen said ranchers have traditionally used 1080 poison and night shooting to kill foxes. Still, he said, they often found dead lambs in the morning.
“Quite clearly, it wasn’t working,” he said.
Whalen said that while he was lying in bed one night feeling too lazy to go outside and scare off foxes, it occurred to him that maybe he could set up lights that just made it look like he was out there. His first idea was to use the red flashing lights set up to warn drivers at road construction sites. He tried that, and it helped, he said. The he went to an electrical engineer and asked him to design a light that flashed randomly and switched from white to blue to red. He wanted the lights to come on automatically when the sun dims and shut off at dawn. Thus was born the Foxlight.
Whalen said that due to his invention, he hasn’t killed a fox since 2006.
The Foxlights come in two versions—a solar-powered light for $129 and a battery-powered one for $89 for use in forested areas with little sunshine.
Whalen said he’s sold about 30,000 Foxlights in Australia—as few as one light to people who just want to guard one chicken coop to as many as 60 to a rice farmer having problems with large flocks of ducks eating his crop.
Whalen said experimental use in the United States indicates that the lights are effective against coyotes and mountain lions, but they haven’t been tried with bears. He said the Foxlights don’t work against coyotes or other predators living in urban areas that are accustomed to seeing lots of lights.
Bean said the Foxlights are one of the top two or three tools that the Wood River Wolf Project uses, though he emphasized that effective deterrence requires the use of numerous approaches.
“One of the things you have to accept with these intelligent canid predators is that they will become habituated,” he said.
Whalen said the lights have been used in Nepal to deter predation by snow leopards, and, for a while, in Pakistan.
“The Pakistani Army confiscated them all on the theory that they might be some kind of landing system for drones,” he said.
Recently, he has donated lights to wildlife-conservation projects in Africa. He said the lights have proven effective at deterring lions and leopards, though not jackals.
In Mozambique, he said, the lights are being used as part of a project by conservationists to keep elephants and hippos out of the local villagers’ vegetable gardens and predators out of livestock corrals. In Zimbabwe at Victoria Falls, the lights play a similar role to help maintain the wildlife that draws tourists.
“That makes me proud,” he said, “that my little baby is doing something for the wider world. Overall, I don’t know how far my lights are going to go.” Source

One thought on “Advances made in wolf deterrents”

A matter of transparency and deep concern about wolf advocacy.