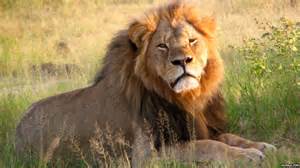 Cecil’s death could prove to be the catalyst of change.  But only if Mankind can get the bigger picture.

Today Earth’s crust is home to over 7 billion humans (don’t forget to add billions of wild animals to that number). And that is one massive number of living creatures on earths fragile crust. Meaning, someone needs to make room or move out or move over for everyone to be able to fit. And mankind has pushed wildlife out and taken over.

Just imagine back 50 to 100 years ago. There were vast herds of wildlife living across the globe spread out across  millions of acres of wilderness.  Today that is not the case. Wildlife is now left to survive in small pockets of wilderness with man living all around them. This is not healthy because wildlife is much more susceptible to disease carrying micro-organisms. Don’t think mankind is not susceptible as well, because one disease could wipe all of us off the map.

Human’s could go the way of the dinosaurs, and we all know how that turned out.

Disease will spread fast in these isolated pockets of wilderness.  Varieties of ticks will be eating off of the same deer. This equals disaster because it can and has added to several new varieties of Lyme disease just within the last ten years.  Example, the Lone Star Tick and Deer Tick, tickborne diseases that affect humans in the USA.

Wildlife cannot survive without large carnivores in the equation.

A Healthy earth will save mankind. Mankind must respect this fact now before it is too late.

Is trophy hunting of earth’s rare and endangered carnivores, such as wolves and lions healthy for earth?

Will humans get the bigger picture before it is too late?

Get the big picture? #StopTrophyHunts on endangered wildlife!

Every single day in South Africa at least two to three captive bred or tame lions are being killed in canned hunts. And hundreds more are slaughtered annually for the lion bone trade.

Who was Cecil the lion?

Latest news on the killing of Cecil

One thought on “Death of Cecil, Will Mankind Get the Bigger Picture Before it’s too Late?”