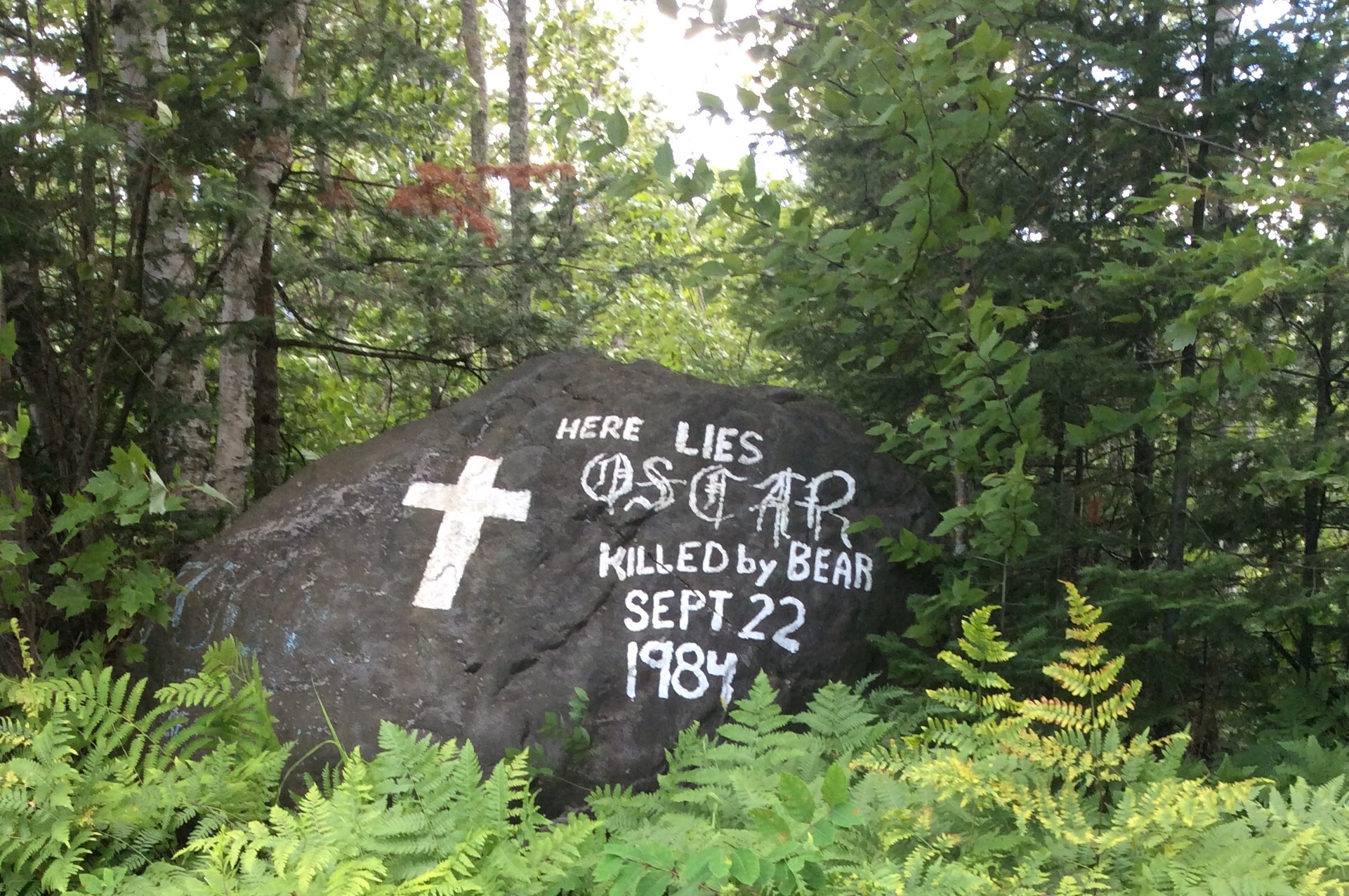 Here lies OSCAR killed by bear  Sept. 22, 1984 and is proof that dogs die while hunting bear. I took the featured photo while out tracking wolves two weeks ago. Bear claws are hollow and filled with bacteria, and if a dog  isn’t out right killed by the bear, the infection from the wounds will finish the job.

Bear hunters would have you believe they are saving your life by sending in dogs to chase bears. How? By educating the bear with hound hunting dogs.

“When you take away the use of the hounds, you take away the opportunity to educate those bears to what is known as aversion conditioning,” explained Josh Brones, the Government Affairs Coordinator for the United States Sportsmen’s Alliance.” Quote is from KRCRTV

This couldn’t be further from the truth. Bears are scared of dogs already. Even a toy poodle scares them off.

Baiting a wild animal so they will stick around long enough for  the hunter to get a kill shot.

The American Dentist who killed Cecil the beloved lion used bait to lure him out of a protected reserve. Then shot him with an arrow and left him to suffer. This inhumane act caused outrage by millions of people demanding his killer be extradicted and tried.

Yet, here in Wisconsin it is common practice to bait a bear with Cheerios to lure them in for a kill shot (but it is not legal to accually shoot the bear over a bait pile). It is common knowledge that  bears love sweats.

I will remind you that, it is not just wild bears hunted with packs of hunting dogs. Bobcats, coyotes and wolves are hound hunted.

If wolves are removed from the Endangered Species List they will be hunted with hound dogs.  Wolf hound hunts took place in 2013 and 2014 in Wisconsin. Packs of dogs engaged wolves in bloody fights and hounders bragged about it amonst themselves within their own twisted circles (confirmed by a reliable source).

Wildlife in Wisconsin is harassed ten months out of the year.

Wild bears in WI are tracked and trailed with packs of radio collared hound hunting dogs. How is it sporting? Hound handlers are often miles away from the chase sitting in their vehicles or sitting at the neighborhood tavern.

I’ve been out in the woods many times late into the night on wolf howl surveys and have heard lost hounds baying. Where are their handlers? Nowhere in sight.

Does Wisconsin condone the hounding of wildlife? It is all legal.  Even the grusome act of penning is legal here.

Captive wildlife, is brought in over state lines into Wisconsin for the purpose  of entertainment. Oh but, they call it education,  it is mutilating & torturing captive wildlife by dogs in training. In a fenced in pen with grown men watching.  It is called penning and it is all legal in Wisconsin.

Warning the following video is grusome but it is a reality that is happening in Wisconsin. From penning facilty where hound dogs are set lose on fox and coyote

What can you do?

Call your elected representatives and express your outrage that this is legal in Wisconsin.

7 thoughts on “Running of the Hounds, Nowhere to Hide in the North Woods”