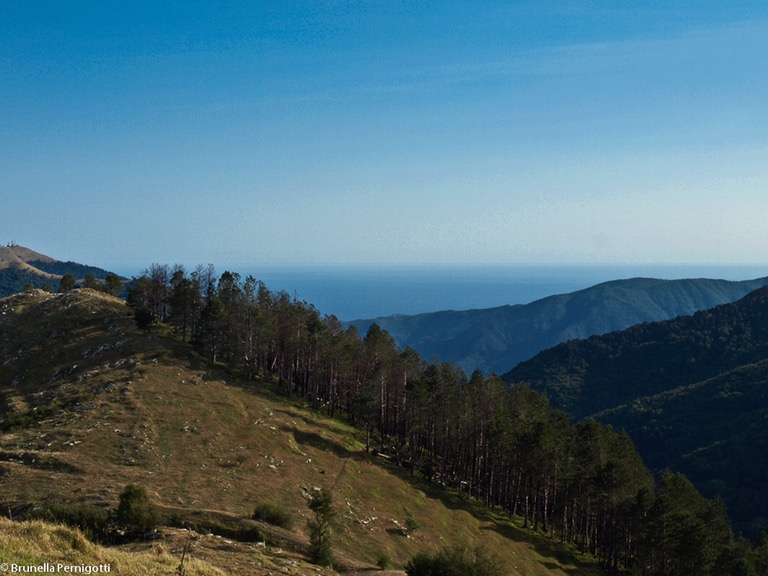 By Brunella Pernigotti
During this hot Italian summer I spent some days in a little Ligurian village, called Rezzo, in the Maritime Alps: this chain of mountains divides Piedmont, where I live, from Liguria and their climate is mitigated by the wet and warm drafts coming from the sea, which is very close to their slopes. For these reasons, Maritime Alps represent the ideal way for wolves to go along when they migrate from South to North of Italy, with the intention to stay or to head to the other European contries. In fact these mountains are covered by steep and thick woods where many wild animals live, but very few humans live.

This is the official video of the park I visited

I wanted to have a closer look at those places, and to talk with a few inhabitants of that village: they are mostly shepherds or farmers, there is only one restaurant and a handful of bed & breakfasts.

The first night I spent there, I could hear some cries coming from the dark wood that spreads out on the mountain on the right side of the house that hosted me. The day after, I asked Bob, my host, for information, and he confirmed my thought: there are many deers, owls and foxes in the wood, but what I had heard in the distance was the cry of a wolf. Bob is an English man: he and his family used to come to Italy for tourism, but about 15 years ago, when they saw Rezzo, they fell in love with it, and decided to come live in Rezzo. They restored some little houses, and to host tourists, mainly foreign people. We started to talk about wolves, and he told me he thinks it’s a good news that wolves are back, but in the village many Italian people don’t think the same.

Wolves come down from the top of the surrounding mountains when the weather is foggy, and sometimes they prey on a sheep or a calf. So I decided to make a little inquiry. First, I went into the restaurant of the village. I soon realized that it’s a usual hunters’ hangout: a big and beautiful deer’s antler was hanging on the main wall with the head of a wild boar and other lifeless trophies.  I asked the woman behind the bar if she knew some hunters, and she started laughing because there were many men in that room, all of them were hunters. So I started to make some questions, without showing my dislike for hunting. They told me that hunting was handed down from generation to generation as in those places there are “many dangerous wild animals” and farmers need to kill them to keep their economic resources healthy: foxes kill their hens, wild boars eat their potatoes and then, now… there are even the wolves! Pretending to be surprised, I asked: “Really?! The wolves? Have someone of you ever seen them?” Of course they have! “In the fog, just as you are in front of me, I saw it! It was looking at me, fearless… And then the morning after, a shepherd told me that some wolves had robbed a sheep. You see, it’s a problem getting worse and worse!” At that moment I asked them if they knew that wolves are a protected species, and that killing them is illegal, but they only did an angry gesture and said: “Rubbish!”…

The day after I headed to a shepherd that runs a ranch a few kilometers above the village. I met his wife, and I was able to talk peacefully & rationally with her about the return of wolves in those places. She told me she understands that wolves are wonderful and precious animals, and she would never think to kill them, but, she complained, when wolves prey on a sheep. And our government leaves the shepherd alone, and without any economic help. She explained that, according to the rules, they are equipped with an electrified enclosure.  Recently, one night, some wolves were able to go through it, and killed a sheep. The morning after, they called the rangers who made an inquiry that showed it was really a wolf that had eaten the animal.  Not only they didn’t get any compensation, but they had also to pay a fine, because the enclosure was too low. So now they are very disappointed, because they had been told that in case of a loss from wolves, they would be entitled to get some money as a compensation. In other words, there are government’s grants to help farmers if they are robbed by wolves, but, the woman said, nobody instructs farmers on what they need to do in order to be entitled to get a compensation.

The long and the short of it is that I think that farmers should be helped, first with a good education, and training on how to use the non-lethal deterrents. They don’t even know what wolves mean for their working activities in terms of environmental balance: for instance it’s true that there are too many wild boars, but wolves should be considered as natural allies: in fact wolves kill them, and help to keep low the number of those damaging animals. On the contrary, humans think that an indiscriminate hunt of any wild animal is the solution.


In the following days, I went along the path that wolves have been covering again for about 30 years, on their way from Apennines to Alps, that means from South to North of Italy and, further, to Europe.

In particular I walked through the Halfmoon Pass (Passo della Mezzaluna): it’s a famous mountain pass that ancient people used to carry goods by carts and mule trains. This path links sea and mountain areas, Liguria and Piedmont. Now biologists are monitoring this pass as it represents one of the most important ways for wolves to move. In winter it’s possible to track them very easily, whilst in summer they stay hidden, and keep far from humans that go trekking. It was so exciting to be in one of the Italian wolf kingdoms, and to imagine them walking. And maybe that very night, and on the same path where I was standing; watching that beautiful landscape with the blue line of the sea over there, and the high pastures all around me.

I love wolves and nature in general. Even if I’m not a biologist, I’m improving my knowledge of wolves and their problems to survive in my country, to devote myself to the protection of the environment and of the endangered species as far as I can do.

I live in Turin, Italy. I’m a teacher, a writer and a photographer. I published a novel and a book of tales and have to my credit about ten one-man exhibitions of photos. I’m a member of the board of a no-profit association of Turin, “Tribù del Badnightcafè”, that organizes cultural and artistic events. Besides I created a group of volunteers to help women who are victim of domestic violence.