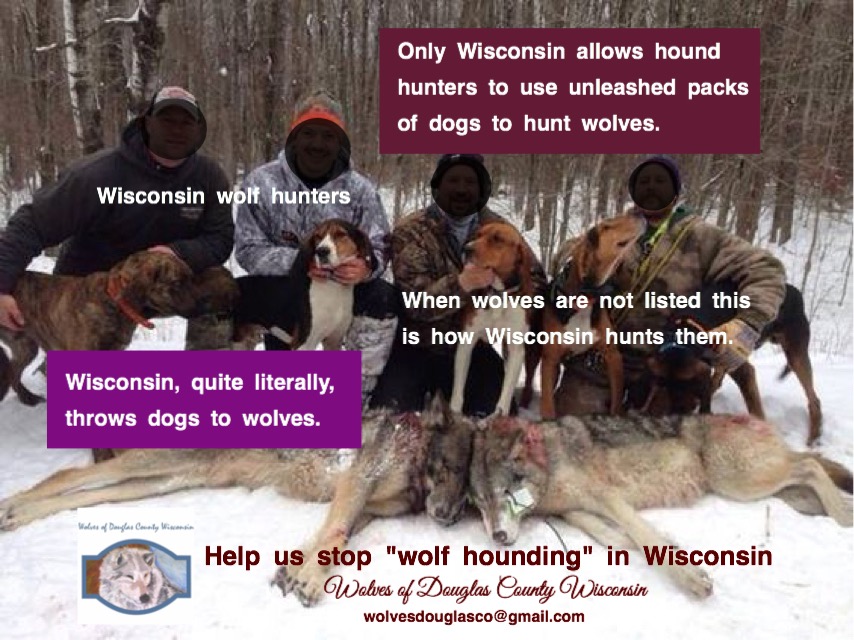 Many animals are harmed (through suffering and killing) to serve human interests and values without due consideration of other animals’ interests and intrinsic value.  ~Compassionate Conservation

Wisconsin can no longer afford to go back, back to the old way of thinking;  the killing of wildlife in order to conserve them. For example; Wisconsin spent decades on wolf recovery, recovery of an imperiled species that was hunted to near extinction; then in a shocking twist, the state of Wisconsin legislature mandated a trophy hunt of wolves fresh off the Endangered Species List;

Compassion for animals should be fundamental for conservation because poor conservation outcomes are often consistent with the mistreatment of animals. ~Marc Bekoff

Wolf pups are born around mid-April and are approximately two and a half months at the time Wisconsin bear hunters begin training dogs on bear starting on July first. Typically wolves leave their pups at a rendezvous site for safe keeping to be watched over by a babysitter. The pup’s family members keep a close eye on the rendezvous site while off hunting. WODCW Blog

However, there is a lack of regulations with bear hunting & training and it has led to a conflict between wolves and bear hunters. Once the training & hunting class B license was removed, that change allowed for an undetermined number of dogs running through wolf habitat. That could definitely be the cause of the 37 bear hunting dog deaths.

Wolves that were defending their pups against free ranging hunting dogs in the pursuit of bear are targeted by special interests instead of the real problem; that being,  conservation policy favoring the killing of one species to save another, for the benefit of sport hunting.

For decades there has been a conflict between bear hunters and wolves in the north woods of Wisconsin, and now that conflict has become one of the reasons Wisconsin legislators want to delist wolves. Watch the following Wisconsin Public Television show from the year 2010.

Wolves are an imperiled species, that are a part of Wisconsin’s wild legacy, and are being pushed to the brink of extinction by conservation policies that favor a group of fringe hunters. These special interest, fringe hunters take advantage of the current political environment.  They cause harm to wildlife by the “loosening” of regulations; they pushed for the removal of the Class B bear training & hunting licence that allowed for an undetermined number of dogs running through wolf habitat. That could definitely be the cause of the 37 bear hunting dog deaths.

Therefore; the legislative process will move forward; to remove the use of dogs to hunt wolves (when wolves are taken off ESL this is one of the methods used to hunt them in Wisconsin), runnng dogs on bear is causing conflict between bear hounders, wolves and northern residents.

The following is a Wolves of Douglas County Wisconsin Wolf Hounding Fact Sheet:

Out of all the states that hunt wolves, only Wisconsin allows hound hunters to use unleashed packs of dogs to hunt wolves. Wisconsin, quite literally, throws “dogs to the wolves.”Hound hunters traditionally train their dogs to focus on specific prey by releasing their dogs to surround, attack and terrorize a prey animal (e.g. a bear cub or fox) for hours on end (up to 16 hours/day) enclosed in a small, open barrel or “roll cage.” At this point it remains disturbingly unclear as to how hound hunters will train their dogs to pursue wolves instead of other animals—will it be by capturing wolves and allowing their dogs to attack them in barrels and pens? How isn’t this worse than illegal dog fighting?
“There has never been a more important time for the people of Wisconsin to show they are not going to give in to a small group of people that want to torture animals for fun under the guise of “sport.”  WODCW Blog

Here’s how you can help;

Please contact us if you have filed written complaints with your local law enforcement concerning issues with bear hounders.

With a guiding principle of ‘first do no harm’, compassionate conservation offers a bold, virtuous, inclusive, and forward-looking framework that provides a meeting place for different perspectives and agendas to discuss and solve issues of human-animal conflict when sharing space. Source

*Wolves of Douglas County Wisconsin is made up of concerned citizens who volunteer their time to make changes for the betterment of Wisconsin’s wolves and wildlife. WODCW is all volunteer and is not a non profit.