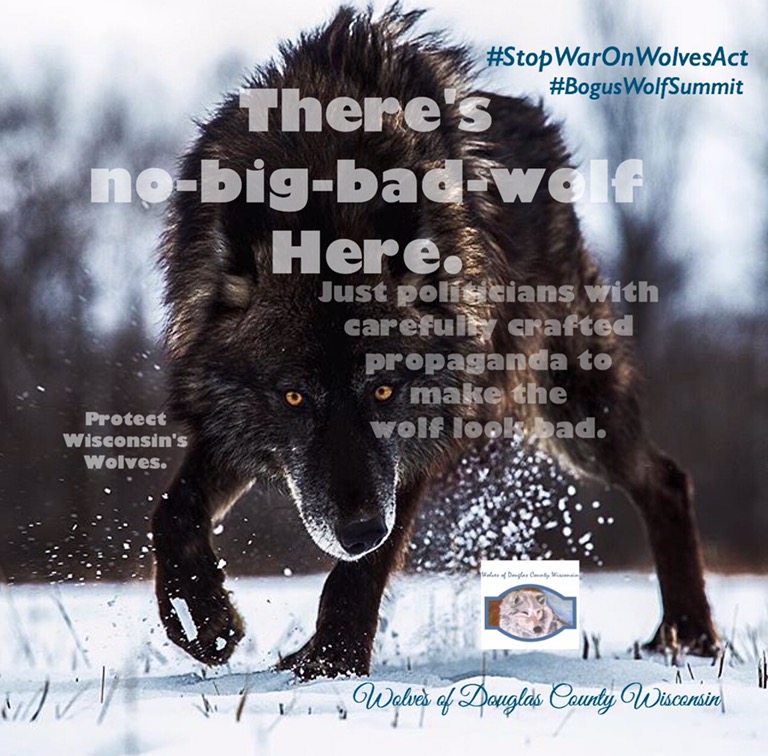 Wisconsin State Senator Tom Tiffany and Representative Adam Jarchow organized a Great Lakes Wolf Summit  to lobby for the delisting of wolves from protections under the Endangered Species Act last fall in an effort to return them to state management.

Last Fall’s Great Lakes Wolf Summit was a half-baked apple pie. This Wolf Summit was missing vital scientific input. Even Patrick Durkin, a freelance outdoor writer stated the obvious,  in an article in The Green Bay Gazette,  “For those reasons and more, expect the Tiffany-Jarchow wolf summit to simply restate best guesses and half-baked assumptions. But shouting them more loudly won’t make them true.”

A second Wolf Summit is being organzied by Wisconsin Wolf Facts.  The summit takes place from 9 a.m. to 2:30 p.m. at the Sugar Camp Town Hall on April 8th. There is an entry charge of $15.00, which includes coffee and lunch.  Laurie Groskopf, spokesperson for the group Wisconsin Wolf Facts, “says there’s a possiblity that Congress will move this year to delist wolves again, putting them back into the state’s hands along with an appeal in the court system.”

Wolves were returned to the safe-keeping of the endangered species list on December 19, 2014 in a court ruling that stated; “At times, a court must lean forward from the bench to let an agency know, in no uncertain terms, that enough is enough,” Howell wrote in the decision. “This case is one of those times.”

Wisconsin allowed the barbaric use of wolf hounding during two (2013-2014) of its trophy hunts on wolves. It’s no wonder that judge Howell ordered wolves placed back on the ESL considering Wisconsin quite literally throws dogs to wolves.

The following is a little history of just how slanted the WDNR’s Wolf Advisory Committee has been: DNR secretary confirms That Wolf Hunt Opponents Were Removed From Advisory Committee. Cathy Stepp Says Staunch Hunting Opponents Weren’t Being Productive Members Of Advisory Body Thursday, June 26, 2014, By Chuck Quirmbach. Stepp confirmed what her critics have alleged: that wolf hunting opponents were by and large kicked off the committee.

Several DNR staff are on the recently created Wolf Advisory Committee, as are representatives of several pro-hunting groups. A smaller number of wolf hunting skeptics also remain on the committee, including a representative of the Great Lakes Indian Fish and Wildlife Commission.  Source

At the first Great Lakes Wolf Summit held last September 2016, “A few wolves are OK,” said Don Peay, founder of Sportsmen for Fish and Wildlife and a speaker at the summit. “They’re part of the system.” Peay and most others at the summit wanted to manage the wolf population by killing some off. Roughly 4,000 wolves roam the Great Lakes region.

Wolf Summit ll will have less speakers than the first summit.

Groskopf said, “The other summit had more speakers, this summit has less speakers so each has more time. So I think there will be more give-and-take at this summit, so I think it’s a good thing to have more participation.” Source  Among the topics will be depredation control, counting wolves, state management, and wolf impacts among other topics. A study completed by the DNR last year found that Wisconsin’s wolf population is at its highest level in recorded history.

Wolf Summit ll is a redundant effort of lurid sensationalism because it’s political backers use carefully crafted propaganda to make the wolf look bad. Wolf Summit ll is playing on fear, in order to return wolves back over to state management; for the sole purpose of holding a trophy wolf hunt.

Wolf Summit ll doesn’t intend to educate Wisconsin residents about how to live with wolves. It intends to push for a state managed wolf hunt; because they believe wolves are decimating the deer herds, destroying the livelihoods of livestock owners and killing a record number of hound hunting dogs.

But the facts prove otherwise.

Facts such as as;  a lack of bear hunting regulations caused the increase of wolf depredations on hunting dogs, the largest change in buck harvest occurred in the Northern Forest Zone (30 percent increase from 2015) and 52 livestock depredations out of 3.50 million head, proves; there’s no-big-bad-wolf here.

Wolf Summit ll backers believe 866 wolves are too many, and want a population cap of 350 wolves; that means a total of 516 wolves will be killed off in a state managed trophy hunt.

That is; if Wisconsin citizens buy into Wolf Summit ll’s redundant efforts of lurid sensationalism.