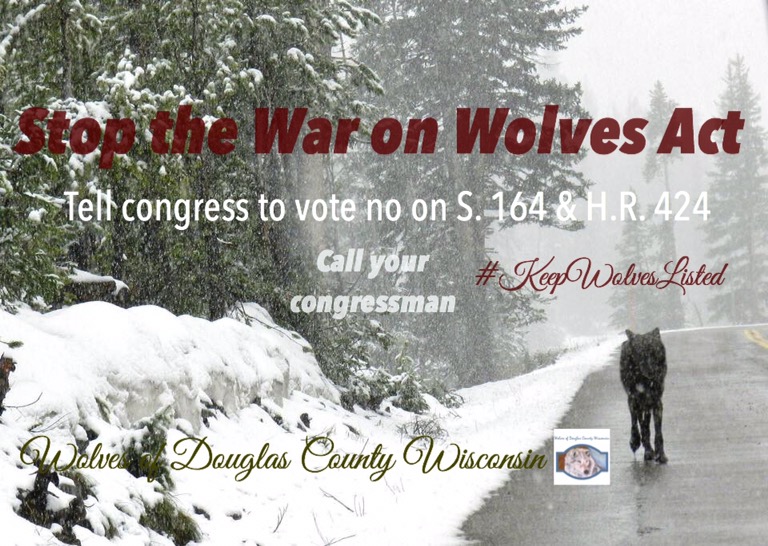 Senators from Midwest introduce bill to strip protections from endangered gray wolves. The legislation would stop citizens right to challenge this legislation in a court of law. There are currently two bills in congress that call to delist the wolf in three states, S. 164 (Senate) introduced on 01/17/2017 by Senator Ron Johnson (R-WI) and H.R. 424 (House of Representatives) introduced on 01/10/2017 by Representative Collin C. Peterson (D-MN).

The legislation would further strip citizens of the right to challenge these lethal programs in court. ~Earthjustice

The War on Wolves Act would turn management of wolves back over to states that are clearly hostile to wolves. The state of Wisconsin’s wolf management plans include; Out of all the states that hunt wolves, only Wisconsin allows hound hunters to use unleashed packs of dogs to hunt wolves. Wisconsin, quite literally, throws “dogs to the wolves.”  Source   Wyoming’s wolf management plans include; In Wyoming, this would allow the state to resume a hostile management program that allowed for unlimited shoot-on-sight killing of wolves across 85 percent of the state.  Source

Tips on Calling Your Member of Congress

When you dial 202-224-3121 you are directed to an operator at the Capitol switchboard. This switchboard can direct you to both senators as well as representatives.
Once the operator answers, ask to be connected to whomever you are trying to reach. They will send you to your senator’s or representative’s office line, and a legislative assistant will answer the phone.
It is important to let them know why you are calling and what issue you are calling about. You will sometimes be able to speak directly to your senator or representative, but more often you will speak to a staff person in the member’s office. This person keeps track of how many people called and their positions on issues, and provides a summary to the member. Be assured that your call does count, even if you are not able to speak directly to your senator or representative.
It is usually most effective to call your own senators and representatives, as each is primarily concerned with residents from his or her district. However, you may occasionally find it useful to call other members, if they are on a certain committee or in a particular position to help get a bill passed.
*Although you may find it easiest to always call the Capitol switchboard at 202-224-3121 to reach your senators or representative, you can also find the direct number to any member’s office by consulting the Senate Phone List or House Phone List.

More information on the War on Wolves Act:

So many have stepped forward for wolves..

There is a community of wolf advocates from across Wisconsin and the nation coming together to work for wolves. This warms the heart ❤️ and gives hope for the future. We are together as one large body ready to fight the War on Wolves. Anti wolf politicians, lacking core values; are striking at the heart of the environmental movement. But we are there Standing on the moral high ground to defend the earth; wilderness, wolves and wildlife.

7 thoughts on “Action Alert: Stop the War on Wolves Act ”