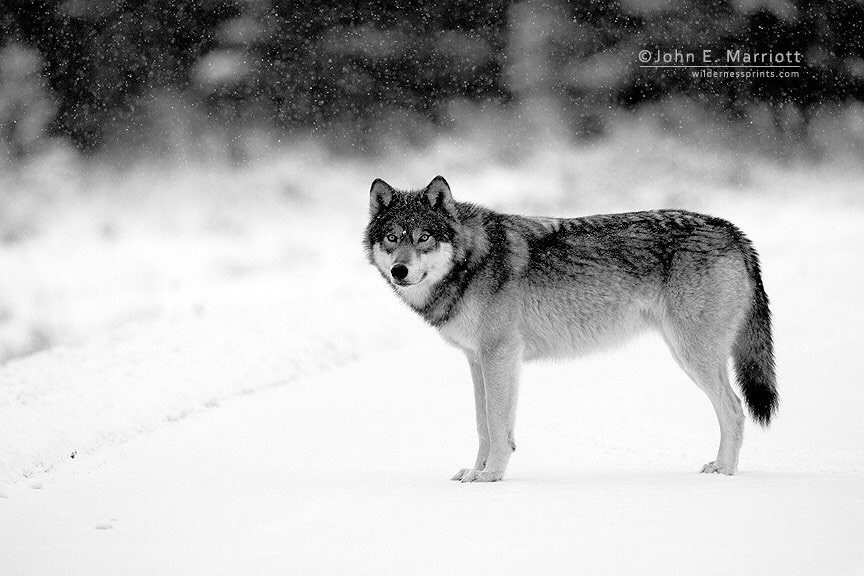 Wisconsin’s Gray wolf was barely off the Endangered Species List (ESL) when Wisconsin’s legislators enacted 2011 Wisconsin Act 169 a law that mandated hunts when wolves are not on the ESL. Wisconsin held three wolf hunts from 2012-2014 allowing the use of dogs to track and trail them in two of the hunts. Thankfully a federal judge ordered Great Lakes wolves back onto the ESL in December 2014 shortly after the third wolf hunt ended! I was invited by Patrick Durkin to sit on a panel hosted by the Wisconsin Outdoor Communicators Association.

Here’s Patrick Durkin’s article that appeared in the Green Bay Gazette in 2014.

Friends and foes of wolf hunting disagreed politely yet passionately July 26 during a six-person panel discussion at the Wisconsin Outdoor Communicators Association annual conference at the Trees for Tomorrow education center.

Even so, courtesy and mutual respect still proved powerless to deliver possible compromises on wolf-hounding and wolf population goals as Wisconsin heads toward its third wolf season Oct. 15. Then again, maybe that’s asking too much of one 90-minute conversation between friends, adversaries and neutral parties over this contentious season.

■ Rachel Tilseth, Menomonie, founder of the Wolves of Douglas County Wisconsin, a wolf-advocacy group she founded in 2012 to remove hounds from the wolf hunt;

■ Dave Mabie, Kennan, a longtime houndsman and Price County delegate to the WCC;

■ Paul Kuhlman, St. Croix Falls, a representative of the Ice Age Trail Alliance and Polk County delegate to the WCC;

■ and Todd Schaller, Madison, chief warden of the Department of Natural Resources.

Tilseth tracked wolves from 2000 to 2013 as a volunteer in the DNR’s winter tracking surveys. She opposes the wolf season, especially provisions that allow hounds to track wolves after Dec. 1. “Wolf-hounding is cruel and inhumane,” Tilseth said. “It’s a return to the days when hunters drove wolves to the brink of extinction.”

Mabie, however, said many people — not just opponents — have misconceptions about wolf-hounding, and hound-hunting in general. Mabie has owned and trained hounds for more than 30 years, and each autumn takes about 15 individuals and families on hound-hunts for bears, bobcats, coyotes and — in December 2013 — wolves.

“(My guests) tell me it’s the most fun they’ve ever had on a vacation,” Mabie said. “They have a new understanding of how hound-hunting actually works. There’s not all this blood and fur flying around the woods like they’ve been led to believe. They can’t believe how misled they were about hunting with hounds.”

Mabie said most wolf-hounding chases differ little from a bird dog pointing grouse or pheasants. “Putting one hound on a track is no problem,” he said. “The dog will run that wolf and bark at it until the wolf sits down, and then the dog runs circles around it, barking. If it were a bird dog with a beeper collar, the beeper would go off and you’d move in to flush the bird. The hound basically goes to point on the wolf.”

Mabie also said hounds have little trouble learning to trail wolves, and sees no need for the hotly contested training season being planned by the DNR and its Wolf Advisory Committee. “If you own good hounds, you put that hound on a wolf track and it will follow it,” Mabie said. “Unless you’re trying to get a straight wolf-dog, you don’t need to train hounds on wolves. They run wolves real easy without special training.”

Meanwhile, discussions about a wolf population goal drew myriad responses. The goal in Wisconsin’s wolf-management plan is 350. The population was estimated to be about 675 this past winter, about 20 percent lower than in 2012, before hunters and trappers took 374 wolves the first two seasons.

Many biologists and wolf advocates, however, believe the goal should be raised. They note the current 350 goal was set before wolves proved they could live in more diverse range than believed.

Tilseth believes the statewide goal should be 1,000 to 1,500 wolves. Bohmann questioned the accuracy of wolf estimates, but said the Conservation Congress currently backs the 350 goal. Mabie said the state shouldn’t set statewide goals. Instead, he thinks annual harvests should be based on site-specific factors like pet and livestock depredation.

David, meanwhile, said 350 is “totally inappropriate” as a statewide goal. “There is no reason we cannot have a higher wolf population than the current goal,” he said. “That needs to change.”

David said Wisconsin’s wolf population — as determined by “the way biologists count wolves” — would stabilize at about 1,000, given what’s now known about the species’ habitat requirements.

“What is it about wolves that we have to drive them far below the land’s carrying capacity?” David asked. “That’s far different from how we manage all other wildlife in Wisconsin. … The need to harvest wolves is far less than the need to harvest the biggest predator in our waters, the sacred muskie.”

Kuhlman said 350 is too low, given how widely wolves are now distributed. “If we got down to 350 wolves, we could create wolf islands on the landscape, which could lead to inbreeding like they’re seeing on Isle Royale (National Park in Lake Superior). More wolves would die. It wouldn’t be a healthy population.”

Would wolf advocates compromise by dropping their opposition to wolf-hounding in exchange for a higher population goal?

Tilseth said no. “I want to see more regulation and more enforcement,” she said. “I’m not confident in the process the state uses for this season.”

Patrick Durkin is a freelance writer who covers outdoors for Press-Gazette Media. Email him at patrickdurkin@charter.net.