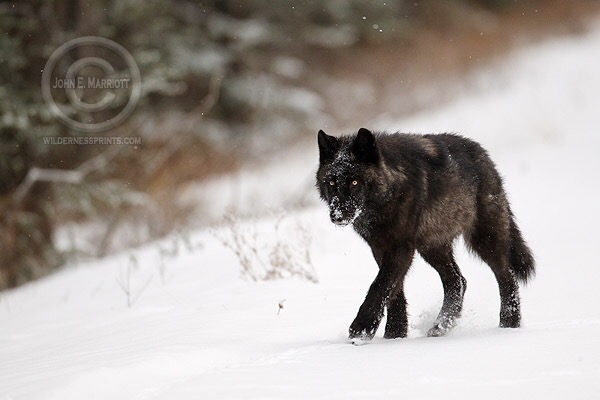 The Wisconsin Department of Natural Resources creates “wolf caution areas” to warn hunters of a wolf attack on hunting dogs. The purpose of these caution areas is to let hunters know that a specific pack has attacked a dog or group of dogs. It is the department’s experience that once a pack has attacked a dog in a hunting or training situation, there is a high probability another attack will occur again during the same year or within the following year. These attacks will generally be on trailing hounds used to hunt bear, bobcat and coyote, but such attacks rarely occur on dogs in bird-hunting situations. Caution areas are not intended to close areas to hunting or training, but rather to advise hunters to exercise greater caution when hunting within these areas. Greater caution can include, staying closer to dogs, avoid releasing at bait sites recently visited by wolves and avoid releasing dogs at or near the site of an attack.

Hunters using dogs in pursuit of bear in the norths woods of Wisconsin run their hounds right through wolf rendezvous sites (where wolf pups are kept). Wolf pups are only about three months old when hunters begin running their dogs on bear. They run hounds through known wolf caution areas; even though WDNR sends out alerts to avoid those areas. In 1982 Wisconsin started a wolf depredation program. Wolf depredation program pays $2,500.00 per hunting dog. In 2016 thirty-seven bear hunting dogs were killed in the pursuit of bear. Several bear hunters received multiple wolf depredation program payments, and even ones with criminal charges; such as poaching a black bear. Harassment of an endangered species began on July first.

In her ruling, Howell wrote: “Wolves are the subject of heated disputes, with those on every side of the issue offering heartfelt arguments as to how best to manage this unique species. The last decade of litigation is a testament to those passions.”

Howell said that while the Fish and Wildlife Service and others may have “practical policy reasons” for removing protections for wolves, federal regulations protecting endangered species trump those concerns.

“At times, a court must lean forward from the bench to let an agency know, in no uncertain terms, that enough is enough,” Howell wrote in the decision. “This case is one of those times.”