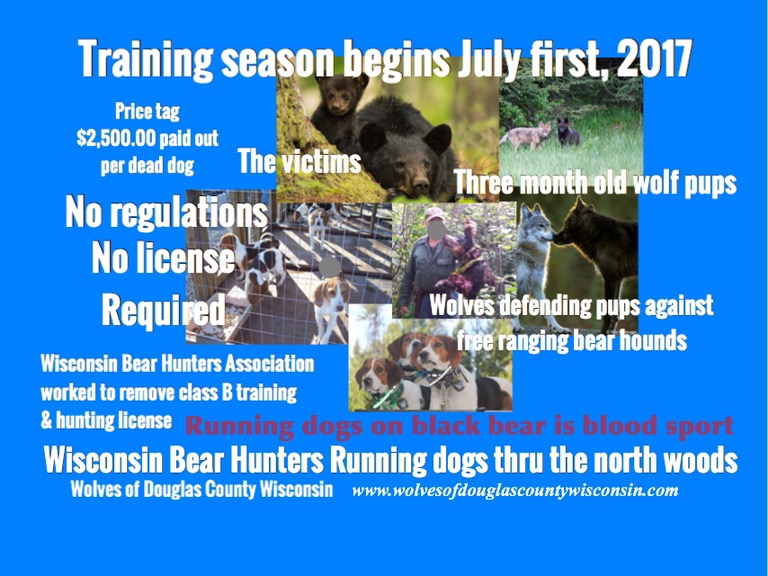 Handlers that lose dogs to wolves defending their pups can be reimbursed up to $2,500.00 per dead dog (the state’s wolf depredation program began in 1985). It’s a win-win situation for hound hunters that send their dogs in pursuit of bear during training and hunting. In 2016 thirty-seven bear hunting dogs were killed in the pursuit of black bear.

According to 2016 Wisconsin Bear Hunting Regulation on WI DNR website It is legal to train dogs in Zones A, B, and D during the season when hunting bear with aid of dogs is open. While hunting bear, or training dogs to pursue bear during the open season for hunting bear, it is illegal to:
-hunt or train dogs to pursue bear before or after established hunting hours;
-hunt bear with dogs in Zone C;
-train dogs by pursuing bear except during times stated above;
-hunt or train dogs unless one person in the group has on their
person rabies tags and dog license tags for each dog;
-hunt, train dogs, or pursue bear with a dog that is not tattooed or wearing a collar displaying the owner’s name and address;
-hunt, train dogs or pursue bear with more than 6 dogs in a single pack, regardless of the number of bear hunters or the
dog’s ownership;
Note: dogs that fall out of the chase may be replaced, but no more than 6 dogs may be used to pursue bear.
-allow the dogs to kill any wild animal;
-hunt or pursue any free-roaming wild animal with the aid
of any dog, May 1 to June 30 north of the highways shown on the map below, except for approved dog trials and training on free-roaming rabbits or raccoons under a hound dog trial or training license

Wolf pups are born around mid-April and are approximately two and a half months at the time WI bear hunters begin training dogs on bear starting July first. Typically wolves leave their pups at a rendezvous site for safe keeping to be watched over by a babysitter.  The pup’s family members keep a  close eye on the rendezvous site while off hunting.

The following is what the WI DNR has to say about wolf rendezvous sites:  Adult wolves are very defensive of pups at rendezvous sites and will attack other predators, including dogs, that get too close to the rendezvous site or the pups. Wolves are probably most aggressive toward strange wolves and dogs at den and rendezvous sites when their pups are small, during the breeding season in January and February and when they are protecting a fresh kill.

Adult wolves are very defensive of pups and end up killing dogs that come into contact with pups near rendezvous sites. Dogs run in large free roaming packs up to 6 at a time in pursuit of bear.

Wisconsin is the only state that reimburses for dogs killed by wolves in the pursuit of bear.

Handlers that lose dogs to wolves defending their pups can be reimbursed up to $2,500.00 per dead dog. It’s a win win situation for hound hunters that send their dogs in pursuit of bear during training and hunting.

The Wisconsin Wolf Recovery Program made it possible for the wolf to reclaim a part of his historic range. That’s a success story!

The conflict between wolves and bear hunters that use dogs has been around for decades. Wolves have been recovering in Wisconsin since the late 1970s. Wolves are a federally  protected species under the Endangerd Species Act in the Great Lakes Region.

In the fall of October 2010 Wisconsin Public Television did a story about ‘Bear Hunters and Wolves’ watch the following video:

In the 1960s Wisconsin started allowing the use of dogs in the pursuit of bear. At that time there were maybe a handfull of wolves in Wisconsin if any.  Wolves have resided in Wisconsin for centuries prior to Europian settlement. Europian settlers arived with livestock in tow, & along with the old story book myths of the the big bad wolf. A few centuries later, by the 1960s, wolves were extirpated from the Wisconsin landscape. Wolves were not a threat to bear hunters because they were all but wiped out of Wisconsin by the 1960s.

Wisconsin Bear Hunters Association was one of many hunt clubs that worked for an aggressive wolf hunt and pushed for  legislation 2011 WISCONSIN ACT 169 that created a mandatory wolf hunting and trapping season as soon as the wolf was delisted.

Included in this bill was the barbaric use of dogs to hunt wolves.  Wisconsin quite literally throws dogs to wolves. Wisconsin became the only state that allows the use of dogs to run down and kill wolves.

‘No Grounds For Hounds’ design by Ned Gannon

Every year starting in July, the north woods of Wisconsin runs blood red with conflict between wolves and dogs in the pursuit of bear. Is this a win-win situation for their handlers that are reimbursed up to $2,500.00 per dead dog?

The WI DNR puts out warnings. The following is from WI DNR website’s Caution areas, dogs and wolf behavior.

“When wolves attack dogs in hunting or training situations on public land, the Wisconsin Department of Natural Resources will create wolf caution areas to warn hunters that a specific pack has attacked a dog or group of dogs. Bear hunters are urged to exercise greater caution if they plan to train hounds or hunt bear with hounds near any caution area, especially if near an actual kill site. Table 1 contains a summary of the 2016 dog depredations by wolves.”

Click on the blue highlighted words and bingo you have all this information at your finger-tips. All of this information is available for hunters using dogs in the pursuit of bear and maintained for their convenience by the WI DNR – in order to prevent wolf-on-dog- fights in the north woods during bear training with dogs.

Why is this wolf-on-dog-fights such a conflict?

I started working on the Wisconsin wolf recovery program as a volunteer Winter Wolf Tracker in the year 2000.  I lost track of how many “no-wolf” bumper stickers I encountered in a day of tracking in the the Chequamegon-Nicolet National Forest. This conflict between bear Hunters and wolves is decades old.

Wolves are here to stay and hopefully attitudes can be softened. Bear hunters using dogs in pursuit of bear are reminded to check WI DNR Website’s for updates on wolf and dog caution areas.

The public is welcome to contact the Bear Advisory Committee for more information contact Dave MacFarland, Carnivore specialist at 715-365-8919.

Wisconsin Residents experiencing any of the following conflicts due to bear hunters use of dogs in pursuit of bear during training or hunting times are encouraged to:

If you come across a lost hunting dog with a GPS collar on please contact your local law enforcement. They will advise you on what to do.

Another issue to address through WI DNR is the controversial practice of bear baiting. Tons of sweet treats are fed to Wisconsin’s 28,000 black bears. Refer any and all suggestions on this practice to your legislators Click Here to find you legislator
~~~

~~~
*please note; Wolves of Douglas County Wisconsin is not affiliated or aligned with any other Wisconsin wolf & wildlife organizations. WODCW is an independent news source, action alerts, education, awareness & advocacy that practices compassionate conservation ethics.  WODCW’s main focus is on Wisconsin’s wild wolf, but is active throughout the Great Lakes Region, the USA and international.