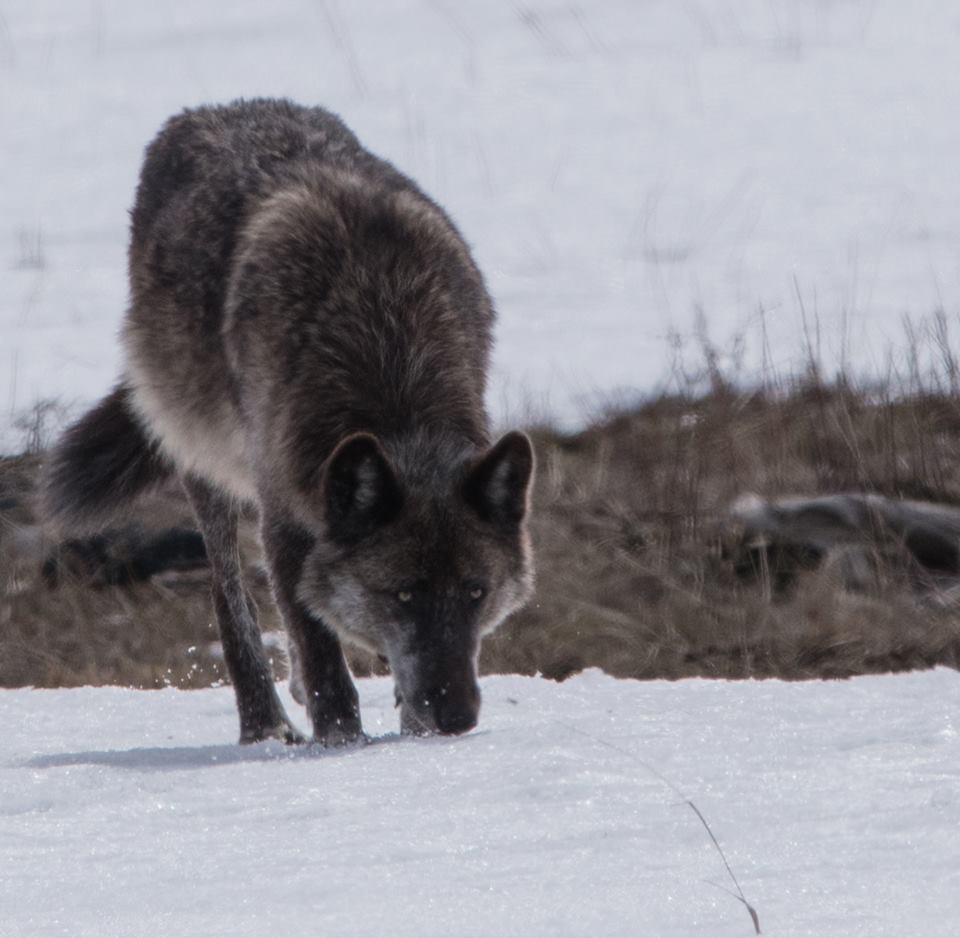 Listening to the mournful calls from Little T, Small Dot and the five pups made while searching for 926F, their lost family member, leaves no doubt in my mind or my heart that they feel strong family bonds. There must be a way to protect YNP wolves that wonder outside the park boundary. Meet the Advocates and listen to their mournful cries, trailer:

In An article from The New York Times “Wolf hunters talk about seeing a pack of park wolves outside the boundary and being able to pick the one they want,” said Doug Smith, the park’s wolf biologist. “They just stand there and have no fear.”

Spitfire, or 926F, was killed just a few miles outside the park in Montana near the northeast entrance to the park, between the tiny communities of Silver Gate and Cooke City, Mont.

She left behind a daughter that wolf watchers have named Little T, so-called because of a small white marking. Another wolf, Small Dot, is the male, and for the first time in three years a litter of five pups was born to the Lamar Canyon pack.

With the matriarch gone, Dr. Smith said, the famed pack could be in trouble. Even though the breeding pack is intact, its seven-member size may not be as resilient as bigger groups. “Its survival is an open question,” he said.

Myself along with Maaike Middleton are working on a Film Project “Inside the Heart of Wolf Advocacy-The Yellowstone Story” and are gathering interviews from advocates affected by the recent killing of a beloved wolf.

“Inside the Heart of Wolf Advocacy-The Yellowstone Story”

“Inside the Heart of Wolf Advocacy- The Yellowstone Story” tells the stories of people working to preserve the legacy of wolves in Yellowstone National Park. A Wolves of Douglas County Wisconsin Film. Produced by Rachel Tilseth and Maaike Middleton and Directed by Rachel Tilseth. In this clip wolf advocates share their stories. Ilona Popper is a writer and advocate for wolves. Dr. Nathan Varley and Linda Thurston Wildlife biologists and business owners of The Wild Side Tours & Treks in Yellowstone National Park. Song credits: “Don’t Know Why, But They Do” Words & Music by Joe De Benedetti & Noah Hill. B roll credits thanks to National Park Service. www.wolvesofdouglascountywisconsin.com for more information. To support the film through a tax free contribution go through our fiscal sponsor click here to donate.

Photograph of Lamar Canyon Wolf 926F known as “Spitfire” and shot by a trophy hunter in Montana, credit Vanessa Vought