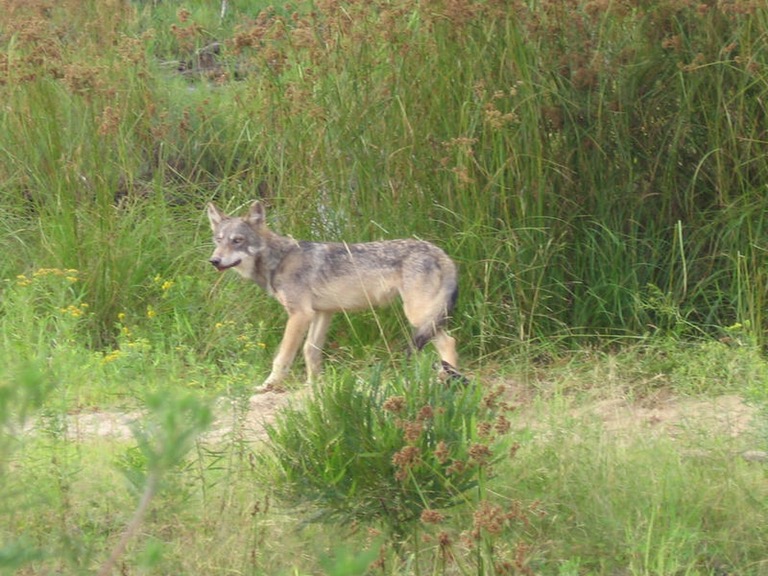 In 2016 41 dogs were killed in the pursuit of bear in northern Wisconsin.  Are any wolves being injured or killed in the decades-old conflict between bear hunters and wolves?  In a call to the USFWS services Great Lakes Office I asked them that question. USFWS didn’t have an answer for me.  My concern is that when USFWS investigates a wolf depredation on a hunting dog; do they investigate if any wolves were injured or killed as a result of the encounter?  Wolves are an endangered species protected under the Endangered Species Act.  The word “protected” was the sticking point for me.  Criminally harassing protected gray wolves is a violation of the ESA.

There is hope for a solution to the deacades-old conflict between bear hunters and wolves, and it’s a legal one.

On August 2nd a letter was sent to USFWS: “This is a formal request for an investigation of alleged criminal violations relating to the illegal take of the federally protected gray wolf (Canis lupus) in Wisconsin. Public Employees for Environmental Responsibility (“PEER”) has learned of ongoing illegal harassment of the gray wolf by hound hunters in Wisconsin.” Letter from PEER

“Washington, DC — Hunters unleashing packs of dogs to tree bears in Wisconsin woods are criminally harassing gray wolves in violation of the Endangered Species Act, according to a complaint filed today by Public Employees for Environmental Responsibility (PEER). The complaint cites state payments to hunters to compensate for hunting dogs killed or injured in clashes with wolves as evidence of violations.”

The last sentence in the above paragraph makes it perfectly clear that the evidence is,  “…state payments to hunters to compensate for hunting dogs killed or injured in clashes with wolves as evidence of violations.”

Wolves a protected species under the federal ESA are being harassed.

…“Endangered species are legally protected from human activity which adversely affects the animals, not just physical injury but harm to habitat or breeding. Loosing packs of dogs on them absolutely constitutes an adverse impact.” Said,  Staff attorney Adam Carlesco (PEER)

In a previous Blog I asked this question; Considering the decades of conflict between bear hunters and wolves; is this becoming harassment of an endangered species?  Isn’t this illegal?

The conflict between bear hunters and wolves is a reality, and it continues to play out every summer in Wisconsin’s north woods.

Hunters using dogs in pursuit of bear in the norths woods of Wisconsin run their hounds right through wolf rendezvous sites (where wolf pups are kept). Wolf pups are only about three months old when hunters begin running their dogs on bear. They run hounds through known wolf caution areas; even though WDNR sends out alerts to avoid those areas. In 1982 Wisconsin started a wolf depredation program. Wolf depredation program pays $2,500.00 per hunting dog. In 2016 thirty-seven bear hunting dogs were killed in the pursuit of bear. Several bear hunters received multiple wolf depredation program payments, and even ones with criminal charges; such as poaching a black bear. WODCW’s Blog

We have no way of knowing if wolves are being killed during these encounters occurring every summer; between dogs that are in pursuit of bear, and wolves that are defending their pups. In the PEER criminal complaint, criminal take can occur when a hunter’s activities, “…as appears to be the case here.” The “hunter’s activities” of running dogs in pursuit of bear through wolf rendezvous sites. Read the definition of criminal take from the press release:

“Under the federal Endangered Species Act, criminal “take” does not require proving that the hunter intended to hurt a wolf. Take can occur when a hunter mistakenly shoots an endangered species believed to be a non-listed animal. Criminal take can also occur when a hunter’s activities, though not specifically directed at a listed species, result in take of a listed species, as appears to be the case here.”  PEER criminal complaint

Bear hunter’s activities, as in use of dogs in the pursuit of bear can be considered criminal “take” in this criminal complaint.  PEER in a Letter to the USFWS law enforcement requested a full investigation:

William C. Woody
Chief, Office of Law Enforcement
U.S. Fish & Wildlife Service
5600 American Boulevard, West, Suite 990 Bloomington, MN 55437-1458
RE: Request for Criminal Investigation – Violation of the Endangered Species Act
Dear Chief Woody:
This is a formal request for an investigation of alleged criminal violations relating to the illegal take of the federally protected gray wolf (Canis lupus) in Wisconsin. Public Employees for Environmental Responsibility (“PEER”) has learned of ongoing illegal harassment of the gray wolf by hound hunters in Wisconsin. These activities have led to adverse effects on breeding patterns and the habitat of the gray wolf. PEER believes these activities constitute prima facie evidence of ongoing criminal misconduct.”  Letter

A response from the president of the Wisconsin Bear Hunters Association Star Tribune article,  “Wisconsin tradition – hunting bears with dogs – comes under attack by wolf advocates” Wolf advocates attack Wis. reimbursements.  By Josephine Marcotty Star Tribune AUGUST 11, 2017, stated, “…also there are many more wolves, period.  Also, the wolves have now devestated the deer population in northern Wisconsin, they have become more aggressive in their search for food, and thus more likely to target our dogs.”   Carl Schoettel, president of Wisconsin Bear Hunters Association, full response to questions from the Star Tribune.

A “Study sheds light on top causes of deer mortality” conducted in 2014 found that; “…In fact, human hunting was responsible for about twice as much deer mortality in northern Wisconsin than the other four causes combined.  The rates of mortality were human hunting 43%, starvation 9%, coyote 7%, wolf 6% and roadkill 6%.”  Source

Who’s responsible for the record number of dogs killed by wolves in 2016?  We know wolves are killing hunting dogs that run through rendezvous sites where wolf pups are kept.  It’s absurd to lay blame exclusively upon an endangered species, wolves in this case. Laying blame on a wild animal that is defending offspring from the activity of human hunters is irresponsible.

For over a year now, I’ve been saying (WODCW Blog) it’s the “loosening” of regulations as the probable cause for the high number of hunting dogs deaths. In PEER’s letter to USFWS requesting a full investigation what the cause is:

“Furthermore, in 2015, the state eliminated the “Class B” bear hound training licenses. While a Class A license or “kill tag” is still required for any hunter wishing to kill a black bear, the Class B licensing requirements have been rescinded. See Wis. Stat. 29.184(3)(a) (stating that no license is required to, among other things, train a dog to track bear or assist a holder of a Class A bear license). Class B requirements mandated that a prospective hunter seeking to train hounds obtain a permit from the state to do so. A Class B permit allowed a hunter to bait bears, train dogs to track bears, act as a back-up shooter, or assist a hunter pursuing a bear. Now both residents and non-residents may run hound dogs through Wisconsin’s wilderness for training purposes unchecked and without licensed oversight from the state.” PEER Letter

Harassment or pursuit of a wolf while hound hunting is prohibited by the ESA.

“Harassment or pursuit of a wolf while hound hunting is a prohibited act as evidenced by the plain language of the ESA’s “take” definition, which includes harassment and pursuit. However, over the course of Wisconsin’s 2016 hunting season, forty-eight hounds were killed by wolves, twenty-one of which occurred on public lands, and more than fifteen of those acts occurred after hunters were informed of the fact that they were hunting in “wolf caution areas.”18 The Wisconsin Department of Natural Resources creates specific “wolf caution areas” that warn hunters of previous instances of wolf attacks on hound dogs in a hunting or training situation. To aid hunters, the DNR website features an interactive “Gray Wolf Depredation Mapping Application” which “shows all verified wolf depredations and threats on livestock, hunting dogs and pets as well as verified human health and safety conflicts.”19 Lastly, DNR has an e-mail and text alert system to inform residents about wolf activity in their area.20”  PEER criminal complaint letter to USFWS

Such action is in obvious conflict with Congress’ intent to protect a fragile species and constitutes a criminal violation of the ESA.

Additionally, because hound training season in Wisconsin takes place when wolves are raising their pups, the fact that hounds are running through clearly identified wolf territory unchecked means that such actions directly impair the wolves’ ability to breed, feed, and find shelter; activity specifically protected by the plain language of the ESA’s implementing regulations. 50 C.F.R. 17.3. Such action is in obvious conflict with Congress’ intent to protect a fragile species and constitutes a criminal violation of the ESA.  PEER criminal complaint letter to USFWS

In a conversation with USFWS Great Lakes Region office over a month or so ago, I asked them if they would investigate bear hunters using dogs in pursuit of bear, because this activity or sport was getting out of hand; not only were a record number of hunting dogs being lost, but I began to think wolves were being harassed by this activity.  Hunters were repeatedly going into Wisconsin DNR Wolf caution areas. “Wolf caution areas are created to warn hunters that a specific pack has attacked a dog or group of dogs. Bear hunters are urged to exercise greater caution if they plan to train hounds or hunt bear with hounds near any caution area, especially if near an actual kill site.”  From the WDNR wolf caution website

USFWS never got back to me, and my next step was to call PEER, because I had heard good things about their work.  In the end, PEER took my concerns seriously, the result is a criminal complaint letter requesting USFWS law enforcement to investigate.  There is hope and it’s a legal one. We are now awaiting a response from USFWS.

In 2017 minimum wolf population estimates was 925.