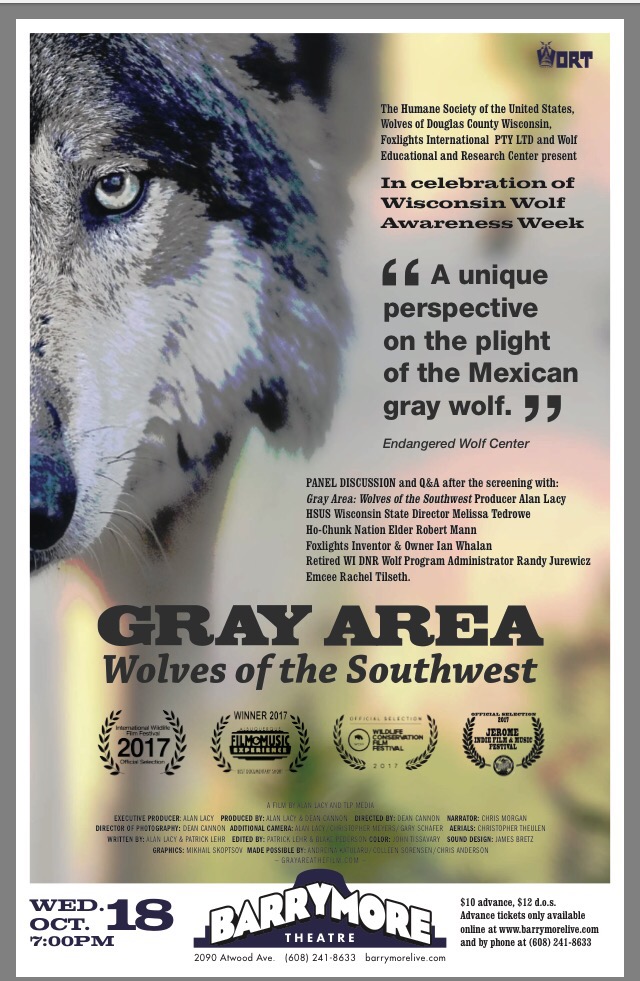 The Wisconsin Premiere of the award winning documentary film

“Gray Area: Wolves of the Southwest”

Advance tickets only available on-line at http://www.barrymorelive.com
and by phone at (608) 241-8633, with $1.00 convenience charge
http://www.wolvesofdouglascountywisconsin.com

A FILM ON THE CRITICALLY ENDANGERED MEXICAN GRAY WOLF

In the American Southwest, a unique species of wolf unlike any other is making a comeback. Considered extinct nearly 40 years ago, the little known Mexican gray wolf has slowly pulled back from the very brink — against all odds. From a founding population of just seven animals, this species has slowly grown to a current wild population of approximately 100, only to face a new threat from within: its own genetics. As part of a bold recovery mission, one lone wolf is given a chance to offer new hope for the survival of her species. In telling this story, narrated by Chris Morgan, “Gray Area” explores whether there can be a balanced and sustainable future where ranchers, conservationists, locals, and biologists alike can coexist with this apex predator. www.grayareathefilm.com

Wolf Awareness Week OCT 15 – 21, 2017, In 1990, Wisconsin Governor Tommy Thompson signed the proclamation of Wisconsin Wolf Awareness Week, a time to celebrate these important animals, by highlighting the threats to their survival, spread the word about what you can do to help wolves stay protected, and help humans learn to live alongside them.
our sponsors: www.planb.foundation,  www.foxlights.com, www.wolvesofdouglascountywisconsin.com, www.humanesociety.org,  www.wolfcenter.org, and www.wortfm.org.

Our commemorative poster design by Ned Gannon and will be available at the night of the screening.

4 thoughts on “In celebration of Wisconsin Wolf Awareness Week: A Wisconsin Premiere of “Gray Area: Wolves of the Southwest” screens in Madison ”

“Lions aren’t shy and wolves don’t play by rules. Because they are in tune with their greatness and their power. They survive on their strengths, not their insecurities and fears. “ —Jenna Todey, Tribe Sister @todeyjenna