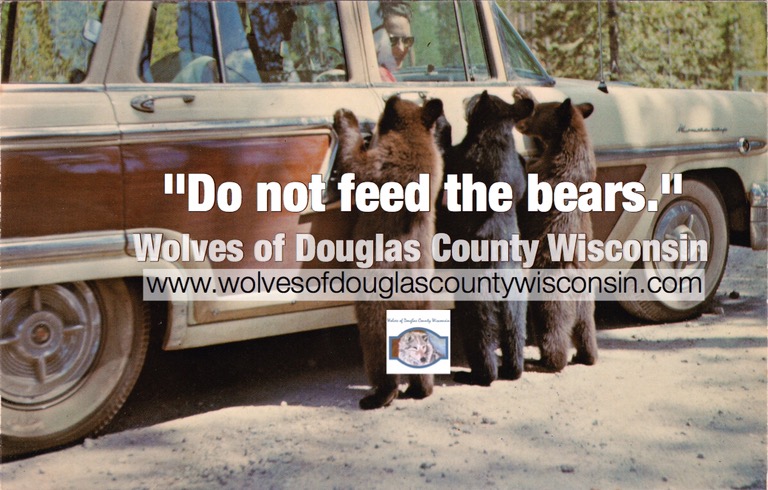 Do not feed the bears.

I have followed the career of Dr. Jane Goodall since childhood.  I remember watching National Geographic specials with wide-eyed-wonderment. I was amazed at how Dr. Goodall observed chimpanzees in their natural habitat.  A natural habitat can be defined as; the natural environment in which an organism lives, or the physical environment that surrounds a species population. I began working to support wolf recovery as a volunteer winter wolf tracker in the year 2000.  Volunteer trackers were instructed to, “do no harm” in wolf habitat.  In other words, do not disturb them.  For instance, if wolves howled back on a survey, the survey was completed; we were instructed not to howl back, because that would be considered disturbing them.

Wisconsin’s natural resources are kept in the public trust for now and future generations.

I’ve been waiting patently since back in January for research to be published concerning the baiting of black bears. It was published this month in a research article, Consumption of intentional food subsidies by a hunted carnivore that reveals some startling results.

Today, black bears in Wisconsin are being conditioned to search out human foods placed at bear baiting stations. This is influencing the black bears natural habitat. Researchers found that; humans are influencing the ecosystem not only through top-down forces via hunting, but also through bottom-up forces by subsidizing the food base.

During its first century, Yellowstone National Park was known as the place to see and interact with bears. Hundreds of people gathered nightly to watch bears feed on garbage in the park’s dumps. Enthusiastic visitors fed bears along the roads and behaved recklessly to take photographs.

The “heart” in conservation is missing when a species is managed for the sole purpose of harvesting it. Wisconsin Department of Natural Resources estimates; most recent data indicates the bear population is currently estimated to be just under 29,000 bears. DNR manages bear population size through regulated hunting. In the end, black bears are managed for economic gain through hunting.

Individual species should and must be managed for the good of the species and the habitat it depends.  “Do not feed the wildlife.”  Let’s bring back the heart of conservation.

“The Circle has healing power. In the Circle, we are all equal. When in the Circle, no one is in front of you. No one is behind you. No one is above you. No one is below you. The Sacred Circle is designed to create unity. The Hoop of Life is also a circle. On this hoop there is a place for every species, every race, every tree and every plant. It is this completeness of Life that must be respected in order to bring about health on this planet.” ~Dave Chief, Oglala Lakota~

The earth we walk upon, is the very thing that connects us to everything, to everyone, to the plants, to the animals, to the water, to the minerals and the cycle of birth and death. And in our quest to achieve the industrial revolution perfection, we have lost our primal sense. That primal sense was the thing that connected us with the natural world, our roots, our beginnings. We are now so ruled by commerce, by the drive, the quest for material property, that we’ve become numb to reality and truth. —Rachel Tilseth