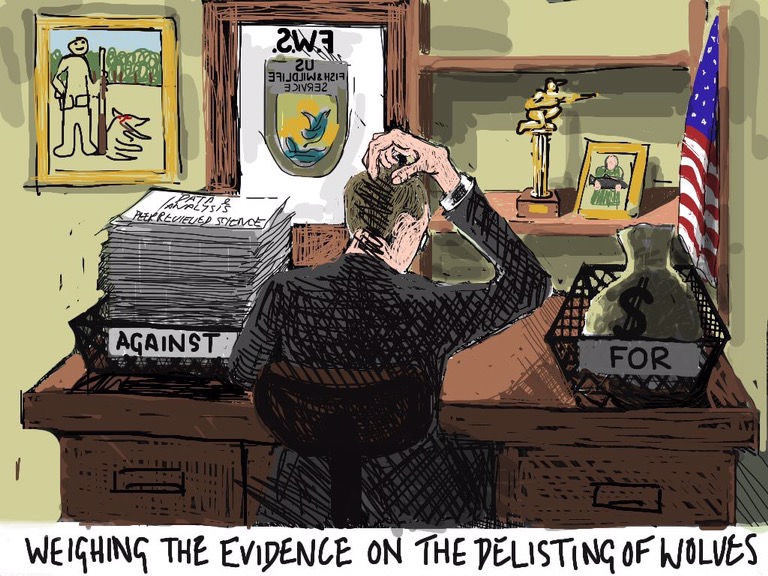 Is there such a thing as an honest politician?  If politicians & special interests get their way and delist the wolf, then they condemn them to be eradicated all over again.

Wolf recovery is a complex issue; a down right balancing act for the Wisconsin wolf.

What’s at stake is a species at risk of extinction. The imperiled gray wolf has recovered to less than two percent of its original range in the lower 48 states.

Wolves have been driven to extinction ever since men began developing expensive cattle breeds. We are looking towards Big Ag as the primary cause of wolf hatred. They’ll fuel the fire and throw the cash on it.  If we let them.

As with any cause, a biased or misleading view can be used to promote, to publicize a particular political cause or point of view. Here we have several anti-wolf politicians making claims to distort the public’ veiw of wolves; wolves are decimating the White-tailed deer herds, attacking livestock and killing hunting dogs. Let’s set the record straight; wolves do hunt White-tailed deer, have killed some some livestock and did kill 37 bear hunting dogs. But in reality; is there a big-bad-wolf here? Let’s get the facts before we sanction the killing of an endangered species.  Read more Click here

Have you written your letter to the editor yet?  Take action for wolves.