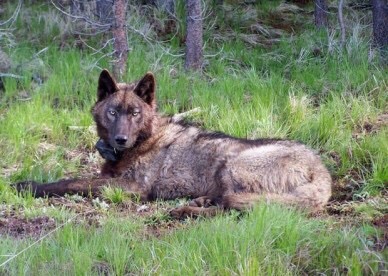 Until wolves were delisted from the endangered species act, Oregon had a written agreement with Wildlife Services that prohibited using cyanide poison traps in known wolf territories. (National Park Service)

Last week, a wandering 2-year-old happened upon a sweet-smelling device(article click here) in the woods of northeast Oregon and bit into it. The bite released cyanide poison into its mouth, causing this young, healthy wolf to essentially suffocate.

That curious youngster was OR48, one of only six members of Wallowa County’s Shamrock wolf pack. He was likely striking out in search of a mate, a territory of his own and a chance to bolster the state’s still small gray wolf population.

Instead, he died in a painfully barbaric fashion orchestrated by an arm of the U.S. Department of Agriculture known as Wildlife Services. This secretive program kills millions of animals across the country each year. Too often, though, the animals that die aren’t those being targeted.

In this case, the M-44 capsule had been placed on private property in the hopes of killing a coyote. It could have easily killed someone’s pet or a raccoon or a fox. This time it happened to be OR48.

As a West Coast wolf organizer for the Center for Biological Diversity and someone who has studied wolves for the past 20 years, the loss of such an animal, especially one that was just ready to mate, is a tragedy.

Anything that tugs on an M-44 will be met with a deadly spray of cyanide, whether it be a pet dog, a fox, an eagle or someone’s toddler.

And it should come as no surprise. These archaic devices are dangerous and kill indiscriminately. In the past five years, thousands of non-target animals have been killed by M-44s. Anything that tugs on an M-44 will be met with a deadly spray of cyanide, whether it be a pet dog, a fox, an eagle or someone’s toddler.

Worse still, the state agency that manages Oregon’s wolves knows the risks. Until wolves were prematurely delisted from the state endangered species act, the agency had a written agreement with Wildlife Services that expressly prohibited the use of M-44’s in known wolf territories.

There is some hope in all this. Oregon could stop contracting with Wildlife Services altogether. Budget recommendations from Oregon Gov. Kate Brown omit the roughly $900,000 usually dedicated to paying the federal agency for killing Oregon animals.

That’s the right move. Scientific research shows lethal methods for controlling predators repeatedly backfire. When coyotes are killed, others ratchet up reproduction to make up for the losses. When dominant cougars and wolves are killed, their territory is often opened up for younger, less-experienced animals that may prey on livestock because they are not yet efficient at killing elk or deer.

Wildlife Services is a rogue agency that often acts at the behest of ranchers and other private landowners, wiping out thousands of large predators. Methods include aerial gunners, bone-snapping traps and, still, exploding cyanide capsules. We, as taxpayers foot the bill for this killing, often carried out just beyond public view.

The death of OR48 is another very painful and public reminder that this terrible work continues. It’s long past time for Oregon to stop hiring Wildlife Services for its ineffective and brutal predator controls.
Amaroq Weiss is a California-based biologist and West Coast wolf organizer with the Center for Biological Diversity.