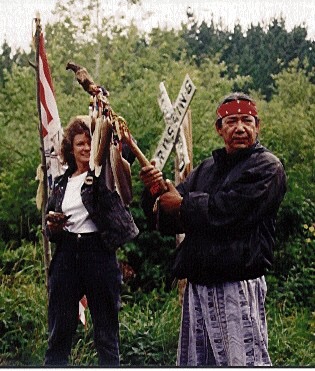 “If you can’t go to El Salvador, then come to Northern Wisconsin and witness the violence.” ~Walter Bresette in his own words.

In the featured photograph is Sandy Lyon and Walt Bresette on the train tracks at Bad River protesting in 1997. The decade of the eighties Wisconsin is known for fighting for treaty rights and protecting the environment.  One of the leaders of this movement was Walter Bresette, July 4, 1947 – February 21, 1999, a member of the Red Cliff Anishinabe located on the shore of Lake Superior. Bresette used nonviolent strategies to push for Native treaty rights.  I was part of the the non-Native supporters that followed Walter Bresette’s nonviolent strategy that eventually won the war on treaty rights. Even members of the American Indian Movement (AIM) were asked to uphold the use of nonviolence at protests where Ojibwa members were spearfishing.
The following is from Tom Hastings’ blog: Hastings on nonviolence:
In spring of 1986 I (Tom Hastings) got a call from Walter Bresette, a Red Cliff Anishinabe (aka Anishinabeg, Ojibwa, Ojibwe, Chippewa) native American. Walter was a treaty rights leader for the 13 bands of Lake Superior Ojibwa and he said to me:
“Get a van full of people and meet me at Butternut Lake as fast as you can. We’ve got hundreds of whites swarming our fishers. They are attacking in boats and with wrist-rockets from the woods along the shore. Hurry.”

The Anishinabe and an unsung nonviolent victory in late twentieth-century Wisconsin Image from Tom Hastings blog Hastings on nonviolence.

The war on treating rights began with Fred and Mike Tribble, two Lac Court Oreilles Anishinabe brothers, were studying treaty law in college and realized the tribes still had many usufructuary rights to hunt and gather on off-reservation lands that were called ceded territory. Source

These two brothers began exercising treating rights off the the reservations in ceded territories, that caused a firestorm of protests by non Natives that turned violent. These encounters became known as the Walleye Wars because the Ojibwa used the traditional method for fishing known as spearfishing.  Bresette called for non violent supporters to be witnesses for the Ojibwa that were exercising their treating rights on ceded territories. Ojibwa were met by several militants that organized some of the largest and most violent protests at boat landings. Read on:

“The two groups that emerged to protest Indian spearfishing were Protect America’s Rights and Resources (PARR) and Stop Treaty Rights Abuse (STA). Of the two, STA was the most militant and–under the leadership of a Minocqua, Wisconsin merchant named Dean Crist–organized some of the largest and most violent protests at boat landings. STA members argued that if they did not stop Indians from spearfishing, their livelihoods would be ruined because Indians would deplete the fish populations and hurt tourism in northern Wisconsin. In reality, the Ojibwe took only a small fraction of all fish taken from the lakes. Non-Indian sport fishermen took the vast majority of the “safe harvest,” the total number of fish anyone was allowed to take out of the lakes each year without depleting fish populations.”  Cited from: Indian Country, Spearfishing Controversy

Bresette’s use of non violent strategies in the face of violent protests  by non Natives won over the public’s sympathy in the end.

Wisconsin had no rights to regulate fishing on Ojibwe reservations and, that the 1837 and 1842 treaties guaranteed Ojibwe rights to hunt and fish off their reservations without being bound by state regulations. This decision, commonly called the Voigt Decision, was upheld by the U.S. Supreme Court that same year.

The state of Wisconsin under Governor Tommy Thompson tried to to appeal the Voigt Decision and to stop spearfishing on ceded lands but failed. At one point a even a federal judge saw the wisdom in using Bresette’s strategy of nonviolence; Judge Barbara Crabb refused because the Ojibwe were doing nothing illegal. Crabb stated that it was non-Indian protesters, not the Indians, who were initiating the violence. Source

The violent protests subsided when the state of Wisconsin stated they would no longer appeal the Voigt Decision. In 1991 Judge Crabb issued a temporary injunction against protesters who engaged in violent behavior at boat landings and on lakes where the Ojibwe fished. Crabb made this injunction permanent in 1992.  Source

Modern fish spearing off-reservation has continued for 20 years. The landmark 1983 Voigt decision by the Seventh Circuit Court of Appeals determined that the Ojibwe had retained rights to hunt, fish and gather wild rice on lands they ceded to the federal government in treaties signed in 1837 and 1842.

The photograph is of a coffee cup I purchased at a Protect the Earth Pow Wow.

Walter Bresette also fought against sulfate mines in ceded territories. I participated in the protests of a sulfate mine at Ladysmith.  I remember walking into the site, and having to be so careful not to trip over the television new’s crews. The TV crews were laying on the ground filming our feet as we walked by them. I watched as Walter Bresette hit the bulldozers with the war club of the famous Sauk chief Black Hawk. The war club was a gift given to Bresette for his work. I remember helicopters flying over-head watching our every move. Unfortunately, our efforts to block mining operations at Ladysmith were unsuccessful.

Walter Bresette continued the fight against sulfate mines and was in on stopping several sulfate mines, even participated in blocking Exxon’s tankers full of sulfate near the Bad River Band of the Chippewa.

Walter Bresette worked for treaty rights, economic development, leadership and the seventh generation concept. He was a tribal leader, activist and author, who championed treaty rights and environmental issues until his passing in 1999. Most importantly I remember Walter for his nonviolent way of asserting Native human rights and treaty rights and for his stand against sulfate mining.

Walleye Warriors tells the exciting and empowering story of how a multi-race and class alliance of Anishinaabe (Chippewa), local residents, and activists defused these dramatic and tense confrontations by witnessing and documenting them. The walleye warriors and their supporters were successful at protecting Chippewa sovereignty despite the attempted use of racism, economic threats, and local government manipulations. ”
Being a “Plain Indian” in northern Wisconsin, who lived here during the times described, I say this is a good read. Ho wa.